Book Review - The Trouble With Goats and Sheep 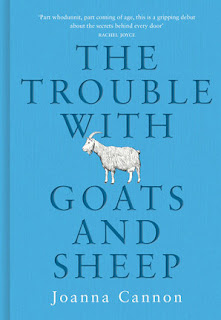 I received a copy of this via NetGalley so would like to thank the publishers for the opportunity to have read this!


England,1976.
Mrs Creasy is missing and The Avenue is alive with whispers. As the summer shimmers endlessly on, ten-year-olds Grace and Tilly decide to take matters into their own hands.
And as the cul-de-sac starts giving up its secrets, the amateur detectives will find much more than they imagined...
MY REVIEW
This was book was an unexpected pleasure to read!  The writing style was so easy to read that it had me captivated from the beginning and I did find it difficult to put down as I just wanted to follow Grace and Tilly on their quest to find the missing Mrs Creasey and God to answer their questions!  As they started discovering the truth from their neighbours - as 'pretend' brownies! - it soon becomes clear that many of the neighbours have more to hide than they'd like to admit and it's a fascinating insight into what goes on behind closed doors, and how rumours quickly spread amongst a neighbourhood, often with no basis of truth amongst them.
Grace is a wonderful little character as she seems much wiser than her years and the attention she pays to the smallest detail is fascinating and shows that its' often the smallest thing revealing the biggest clues!  Some chapters are told from different neighbours' perspectives too and this really adds an extra dimension to the story and lets you see things in different lights - sometimes with shocking revelations!
This book really captured the essence of the Summer of 1976 and I loved all the references to hit TV shows at the times along with things such as Sodastreams and Arctic Rolls!  A fun walk down memory lane for the reader!
Despite the slightly dark undertone of certain topics and rumours, this book had quite a refreshing sense of humour in the way it was told and I'd highly recommend it if you are looking for a book that is a little different to the norm
Posted by Books and Me! at Wednesday, May 11, 2016