THE GIRL WHO LIED by Sue Fortin Book Review 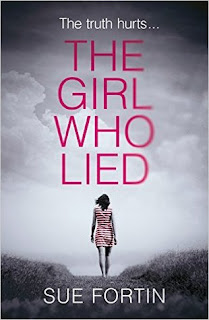 The truth hurts…Erin and Roisin were once friends until a fatal accident ruined both their lives. Now, Roisin has discovered a secret—one Erin has kept for over a decade—and she’s determined to make Erin pay for her lies.Erin wants nothing to do with Roisin. She has a new life in London and no intention of going back home. Yet when her father is mysteriously and critically injured, Erin has no choice but to return and face Roisin—and her past. Erin knows if the secret of what she gave up got out, the consequences could be devastating.When Roisin suddenly disappears, suspicion soon lands on Erin. She would do anything to protect her family, but just how far is she willing to go when time is running out…?

I received a copy of this via NetGalley and HarperImpulse in return for a fair and honest review - thankyou!
I was immediately drawn to this book by its' cover and title!  And I've just spent the afternoon enthralled by this tale of secrets, lies and deception!

When Erin hears that her father is seriously ill in hospital in Ireland she knows that she must return home immediately from her current life in London, but she seems quite reluctant as she's afraid to confront the past and that is the effect going home has on her.  Just before she returns home she receives a worrying email from her former best friend, Roisin, which contains a photograph and this brings back some very painful memories and the floodgates soon open as to what Erin has  been running from, and what affected her and Roisins' family so much all those years ago.

Running alongside the now storyline, we also get flashbacks to their teenage years when the girls are best friends, until Erin starts dating Niall, who is Roisins brother and their friendship starts to splinter, even more so on the night of the fatal accident that changed both their lives forever

This is really cleverly written with small details revealed every now and then which keeps the reader guessing and intrigued throughout, and it becomes like  a jigsaw puzzle as you start to put the pieces together, but even then there are added twists and turns that you don't see coming but slowly the picture becomes clearer and the lies start to reveal the truth

Really enjoyed this  one as it had many different elements to it.  Really enjoyed Erin as a character as at the beginning she thought she wasn't ready to be back home, but the more time she spent there helping her parents and discovering who she was, she felt she didn't have to run anymore.  Re-connecting with old schoolfriends also helped and was a nice little side story