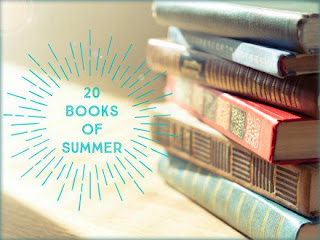 so the challenge continues! If you've not seen my posts before, this challenge was started on Twitter by Cathy of  746 books and is to read 20 books of your choice by the end of Summer!  I was in need of a kick up the bum in getting through the ever increasing pile of paperback books in my possession, so signed up straight away!  And so far so good! 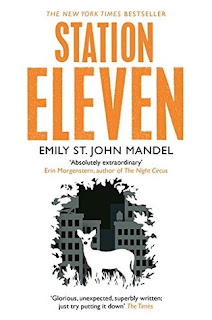 An audacious, darkly glittering novel set in the eerie days of civilization's collapse, Station Eleven tells the spellbinding story of a Hollywood star, his would-be savior, and a nomadic group of actors roaming the scattered outposts of the Great Lakes region, risking everything for art and humanity. One snowy night Arthur Leander, a famous actor, has a heart attack onstage during a production of King Lear. Jeevan Chaudhary, a paparazzo-turned-EMT, is in the audience and leaps to his aid. A child actress named Kirsten Raymonde watches in horror as Jeevan performs CPR, pumping Arthur's chest as the curtain drops, but Arthur is dead. That same night, as Jeevan walks home from the theater, a terrible flu begins to spread. Hospitals are flooded and Jeevan and his brother barricade themselves inside an apartment, watching out the window as cars clog the highways, gunshots ring out, and life disintegrates around them. Fifteen years later, Kirsten is an actress with the Traveling Symphony. Together, this small troupe moves between the settlements of an altered world, performing Shakespeare and music for scattered communities of survivors. Written on their caravan, and tattooed on Kirsten's arm is a line from Star Trek: "Because survival is insufficient." But when they arrive in St. Deborah by the Water, they encounter a violent prophet who digs graves for anyone who dares to leave. Spanning decades, moving back and forth in time, and vividly depicting life before and after the pandemic, this suspenseful, elegiac novel is rife with beauty. As Arthur falls in and out of love, as Jeevan watches the newscasters say their final good-byes, and as Kirsten finds herself caught in the crosshairs of the prophet, we see the strange twists of fate that connect them all. A novel of art, memory, and ambition, Station Eleven tells a story about the relationships that sustain us, the ephemeral nature of fame, and the beauty of the world as we know it.

Have to admit that this book wasn't on my original list of 20 Books of Summer, but I was recently shopping in Waterstones and this book caught my eye, and the lady serving on the till that day couldn't stop raving about it when I went to pay, so with that high praise I bumped it to the top of my TBR list and I am extremely glad I did!

I wasn't really sure what to expect from this book as it did appear to be quite a bleak outlook - it is mainly set 20 years after the Georgia Flu has hit the world which has killed 99% of the worlds population.  Those left are numb, in shock and seek to find others to help each other carry on living in a world that they don't remember.  Everything they thought they knew about the world has disappeared.  It becomes a real back to basic way of living for those who have survived and it is fascinating to read how they all cope and even in the darkest times they find hope and ways to keep going.

There is a link between the characters featured so the story flashes backwards and forwards to before and after and we get to see the tiny threads that connect them.  Some extremely interesting characters and situations unfold before our eyes as we read and I was hooked as it was written in such a way that it appeared a scenario that could actually happen and leaves you wondering how we would all cope nowadays with things and people that we take for granted.  I will be looking out for the authors other books now too as it was my first of hers that I'd read!  Highly recommended!! 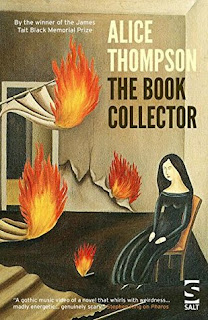 Alice Thompsons new novel is a gothic story of book collecting, mutilation and madness. Violet is obsessed with the books of fairy tales her husband acquires, but her growing delusions see her confined in an asylum. As she recovers and is released a terrifying series of events is unleashed.

I have been intrigued by this book ever since I saw it on BookTube  so I bought a copy online and as it was only a small book - 224 pages in paperback - it was a perfect read for me today sitting in the June sunshine..... yes we did actually get some!

I thought this was  a fascinatingly creepy read! Violet was a 19 year old orphan when she is swept off her feet by Lord Archie Murray, and within a year they are married and have a son Felix.  Archie has a very controlling personality and seems to be more in love with his book collection than Violet.  While she is at home all the time she starts to go through his collection of first edition books, and the mysterious book of fairytales he keeps hidden away starts to become all she can think of.  Meanwhile, her grip on reality after motherhood seems to be crumbling around her and at one stage can see creatures crawling under her sons skin which she tries to remove from him.  This behaviour sees her locked up in the local Asylum, where she meets other women who seem to be of the same mind as her that there is more to their staying there than meets the eye, and it seems to be what their husbands think best for them.

You are never really sure who is more out of touch with reality in this book as most of the characters seem to be quite fragile mentally!  While Violet is in the Asylum, Clara moves into their home to take care of Felix and this proves difficult for Violet to deal with when she is eventually let out.

Some of the women she meets in the Asylum then go missing, so this adds more to the mystery of the book along with the fact that Violet has more disturbing dreams - are they trying to tell her something? What is the link with the fairytales?

Quite disturbing at times but a quick and enthralling read!