Before You Book Review

BEFORE YOU by KATHRYN FREEMAN 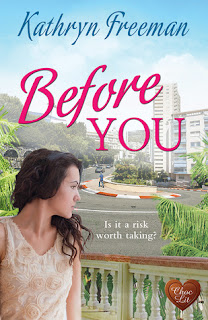 When life in the fast lane threatens to implode …
Melanie Hunt’s job working for the Delta racing team means she is constantly rubbing shoulders with Formula One superstars in glamorous locations like Monte Carlo. But she has already learned that keeping a professional distance is crucial if she doesn’t want to get hurt.
New Delta team driver Aiden Foster lives his life like he drives his cars – fast and hard. But, no matter how successful he is, it seems he always falls short of his championship-winning father’s legacy. If he could just stay focused, he could finally make that win.
Resolve begins to slip as Melanie and Aiden find themselves drawn to each other –with nowhere to hide as racing season begins. But when a troubled young boy goes missing, everything is thrown into turmoil, including Aiden’s championship dream.

Was very lucky enough to receive a copy of this via the publishers Choc Lit, and NetGalley in return for a fair and honest review so thankyou to both for the opportunity!

Have to admit to having a vested interest in this book, as I am a member of the Choc Lit Tasting Panel, where I'm lucky enough to be sent manuscripts they receive and to give my thoughts on them, and I had the pleasure of reading this back in 2014 and it grabbed me straight away then so I was extremely happy to find out it was going to be published!

Melanie Hunt has been in the male dominated sport of F1 for years as a press officer so she is used to the behaviour of the drivers both on and off the track!  But when Aiden Foster joins the Delta F1 racing team she is loathe to admit she has  a little crush on him, as she is very reluctant to mix business with pleasure.

But they hit it off almost immediately as there is no pretending with Mel and she gives as good as she gets on the banter front, and Aiden seems to respect that.  And considering his reputation as a playboy and joker he seems to have met his match!

Aidens'  father used to be a F1 World Champion so he's always had that to live up to, and you get the impression that he goes along with the persona that people expect to distract from past glories.  He's happy to go along with the praise his father always received as  a driver, even if the man he knew didn't quite match that.

Mel also has her own past tragedies that refuse to leave her and these also bring her closer to Aiden, and they struggle to decide whether they should give it a try together or keep things strictly professional.

Really loved the fast paced world of F1 life, and how the distractions of real life and families got involved in the mad world of sport and this really added something different to this romance, and a mans determination to prove he is just as good as his father on the track, but a better man off it

Highly recommended if you love a sizzling sporty romance!!