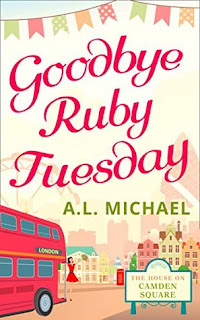 Four friends have become three. But that’s only the beginning.
Ruby, Evie, Mollie and Chelsea were the bad girls at school. But Ruby was the baddest. Evie fought her anger, Mollie fought her mother and Chelsea…well, Chelsea just fought. But Ruby set her sights on a bigger stage. And together, they dreamed of a future where Ruby could sing, Evie could make art, Mollie could bake, Chelsea could dance – and all of them could finally feel at home.
A decade later, the girls are reunited for the funeral of Ruby, who took the world – and the charts – by storm, before fading too soon. And Evie doesn’t know whether to laugh or cry when she learns that Ruby has left them a house on Camden Square – the perfect place for them to fulfil their dreams. But does she dare take the plunge, and risk it all for one last shot at the stars?
Goodbye Ruby Tuesday is Book 1 in A.L. Michael’s new series, ‘The House on Camden Square’
Kindle Edition, 243 pages
Published April 29th 2016 by Carina

I was given the opportunity of reading and reviewing this via the author on Twitter and NetGalley so would like to say thankyou to both!

This is the first in the The House On Camden Square series, and if this first book is anything to go by then we are in for a real treat with this series of books!

A group of schoolfriends, Evie, Mollie and Chelsea meet up at the funeral of their old friend Ruby, who after leaving school became a music star but met with a tragic end.  The girls were all as thick as thieves during their time together at school, but they soon drifted apart when they moved on to college and real life got in the way.  So they were all at different stages in their lives but none of them really where they wanted to be.

Ruby had written them a letter before she died saying how much she missed them all and how she wished they'd all stayed in contact, and she hoped that she could help them all realise their dreams by leaving them a house in London so that they could open an Arts Centre, which they all dreamed of doing as they grew up.  With their different circumstances, they don't all jump at the idea to begin with but they soon think an escape from 'reality' is what they all need and want to give it a shot as Ruby believed in them so much.

It is fascinating to see how quickly the old friendships are rekindled and how they all seem to give each other strength and confidence to make changes and make things happen.  We also get flashbacks from their schooldays so we can see how they all met and how they helped each other back then too.

Lots of really funny, friendly banter amongst them all really lifted this story and even when they had to confront more painful blasts from the past you get to see how much they grow and how they deal with the trouble that they've all faced in different ways over the years.

Sharing the studio space is Killian, a loner carpenter, who also knew Ruby and knew the good and bad side of her too and that brings  another aspect to the story of seeing how fame changed her and how she treated people during that part of her life.

I loved reading this and couldn't put it down once I'd started it, so am really eager to read the second in the series, Nice Day for a White Wedding (yes i'm singing that title to myself as i type it!) and I highly recommend this new great series!!