LAST TO DIE by ARLENE HUNT 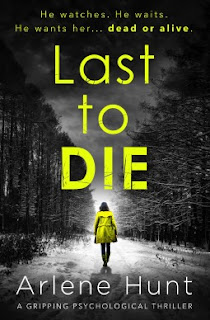 He watches. He waits. He kills ... When Jessie Conway survives a horrific mass high school shooting, in the aftermath she finds herself thrust into the media spotlight, drawing all kinds of attention. But some of it is the wrong kind. Caleb Switch, a sadistic serial killer has been watching her every move. A skilled hunter, he likes his victims to be a challenge to him. Jessie is strong, fearless, a survivor, and now…she is his ultimate prey. As Caleb picks off his current victims one by one, chasing, killing and butchering them with his crossbow, he’s closing in on Jessie... But will Jessie defy the odds and escape with her life? Or will she be Caleb’s final sacrifice …

The striking cover immediately grabbed my attention when I first spotted this book and I am very grateful to Bookouture via NetGalley for allowing me the chance to read and review this book!

There has been a rash of gripping thrillers about so far in 2016 and there seems to be no sign of the quality of them slacking if this is anything to go by!  I hadn't read anything by Arlene Hunt before but I will be looking for more from her in the future as the way she wrote was highly polished and had me wanting more with every turn of the page - or should that be tap of the Kindle screen!

We start the story through the eyes of Jessie Conway, who is a teacher of a class of troubled children at Rockville High.  She seems very calming in her position as the kids in her class all seem to have suffered neglect or abuse in their past so look to their teacher for stability.  But their quiet is shattered one day when 2 former pupils storm the school with autuomatic weapons and begin randomly shooting.  It is only when Jessie puts her own life on the line that the shooting ends - but where Jessies' nightmare begins.

Her heroic actions are brought to life but an ever invasive press and this brings her to the attention of Caleb Switch, a killer with a sick passion of hunting his victims after he captures them.  He always seems to be looking for new ways of getting the high he seems to get from his favoured form of murder.

Jessie tries to move on with her life, but this isn't helped by one of the local reporters digging into her background to find out why she is so against talking to any of the  press.  She soon finds out and this brings the past back - a past she'd not even discussed with her husband.

This was a fascinating read from start to finish with the tension building over different revelations and the last few chapters were extremely pulsating and had me gasping for breath near the end!  A fitting end to a gripping and exciting thriller.