S is for Stranger Book Review

S IS FOR STRANGER by LOUISE STONE 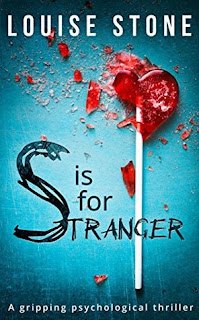 A gripping debut psychological thriller you don’t want to miss!

‘Louise Stone is an exciting new talent to watch. S is for Stranger is full of tension and atmosphere. A hugely compelling read.’ ― Amanda Jennings, author of In Her Wake


There are two sides to every story.

But only one is true.


Sophie wished she’d paid more attention when her little daughter, Amy, caught sight of a stranger watching them. She only looked away for a second. But now Amy’s gone.


No one trusts an alcoholic. Even a sober one. The police are suspicious of Sophie’s tangled story and so is her ex-husband, Paul. Especially when new information emerges that changes everything.


But what if Sophie is telling the truth? What if her daughter really is missing? And what if that stranger at the fairground wasn’t really a stranger at all…


Perfect for readers looking for their next addictive read afterThe Girl on the Train and Behind Closed Doors.

I was extremely grateful to receive a copy of this via NetGalley and the publishers, Carina, in return for a fair and honest review - so thankyou!

The cover was really intriguing when I first saw it and the insides match the cover for intrigue!

Sophie is an alcoholic, so her estranged husband Paul has custody of their 8 year old daughter, Amy.  According to Sophie as we see the story from her perspective we learn that he was extremely manipulative while they were together and that had driven her to the bottle.  She gets to spend Saturdays with Amy and the more time she spends with her, the more she realises she's missing out on and dreams of starting afresh and running away with daughter to escape Paul.

On a trip to the fairground every parents worst nightmare becomes a reality for the couple as Amy disappears.  Sophie swears she saw her talking to a stranger and then she was gone.  No trace. Nobody saw anything.

The desperation to find their daughter becomes too much and Amy is tempted to hit the bottle again.  With the help of a therapist recommended by the police, she starts to unravel the hidden traumas that have littered her life in the hope that they can figure out who would want to hurt her by taking Amy.

Sophie seems to have been plagued by various tragedies throughout her life so has learnt to block them out with various methods, and as more and more are revealed through therapy her mind seems to become more muddled as she tries to put the pieces together to make sense of it.  And as the reader finds out more, you become conflicted with wondering who to believe!

I did find the ending a little hurried, after the slower pace of them trying to track down Amy, but that still didn't distract from a really gripping debut thriller and I'm looking forward to reading more Louise Stone in the future!