THE FIRE CHILD by S.K. TREMAYNE 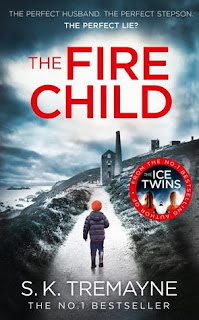 The chilling new psychological thriller by S. K. Tremayne, author of the Sunday Times No. 1 bestseller, THE ICE TWINS.When Rachel marries dark, handsome David, everything seems to fall into place. Swept from single life in London to the beautiful Carnhallow House in Cornwall, she gains wealth, love, and an affectionate stepson, Jamie.But then Jamie’s behaviour changes, and Rachel’s perfect life begins to unravel. He makes disturbing predictions, claiming to be haunted by the spectre of his late mother – David’s previous wife. Is this Jamie’s way of punishing Rachel, or is he far more traumatized than she thought?As Rachel starts digging into the past, she begins to grow suspicious of her husband. Why is he so reluctant to discuss Jamie’s outbursts? And what exactly happened to cause his ex-wife’s untimely death, less than two years ago? As summer slips away and December looms, Rachel begins to fear there might be truth in Jamie’s words:‘You will be dead by Christmas.’

Hive - buy from your local bookshop

I was very lucky to receive a copy of this via NetGalley, and after enjoying The Ice Twins so much last year, I was really looking forward to sinking my teeth into this one.  And once again I haven't been disappointed with another creepy thriller from the author

This story is set in Cornwall, and each chapter is a countdown to Christmas so that you know that something big is set to happen but you aren't quite sure what as you read.

Rachel has just married David, and moved to his family home in Cornwall.  He is much older, richer and taller than her and is a widow after losing his wife, Nina, in a tragic accident in the mines near their home 18 months earlier.  David has an 8 year old son too, Jamie, and he is one of the reasons that Rachel fell in love so quickly with David as she was captivated by his son.

Rachel struggles to settle in the 18 bedroomed house as it seems to contain many ghosts of Nina who was in the process of renovating the house when she died.  Many rooms are untouched and Rachel also finds boxes of Ninas' things in the basement so can't help but look.  This is when she finds letters that Jamie wrote to his mother after her death, as the therapists he saw thought it would help him get through his grief.  His behaviour has recently deteroriated again especially towards Rachel and she is struggling to get through to him.  He has also had some chilling dreams about her which unsettle her more when they start coming true.

David is away working in London a lot of the time, so isn't around much but you do pick up on the tension that time apart and the behaviour of Jamie is having on the couple, and when Rachel starts to discover certain information about the death of Nina it just pushes them further apart and adds to the intrigue of just who is telling the truth about past events.

I did find the ending a little manufactured and rushed after having the tension built up so much, but it didn't distract from a chilling read so if you enjoyed The Ice Twins then you'll be enjoying this too!