THE READER ON THE 6.27 by Jean-Paul Didierlaurent 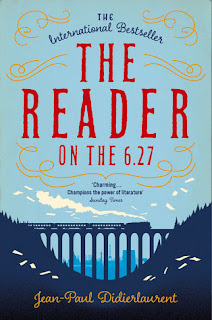 An irresistible French sensation - Mr Penumbra's 24-hour Bookstore meets Amelie - The Reader on the 6.27 explores the power of books through the lives of the people they save. It is sure to capture the hearts of book lovers everywhere. Guylain Vignolles lives on the edge of existence. Working at a book pulping factory in a job he hates, he has but one pleasure in life ...Sitting on the 6.27 train each day, Guylain recites aloud from pages he has saved from the jaws of his monstrous pulping machine. And it's this release of words into the world that starts our hero on a journey that will finally bring meaning into his life. For one morning, Guylain discovers the diary of a lonely young woman: Julie. A woman who feels as lost in the world as he does. As he reads from these pages to a rapt audience, Guylain finds himself falling hopelessly in love with their enchanting author ...The Reader on the 6.27 is a tale bursting with larger-than-life characters, each of whom touches Guylain's life for the better. This captivating novel is a warm, funny fable about literature's power to uplift even the most downtrodden of lives. 'The humanity of the characters ...the re-enchantment of everyday life, the power of words and literature, tenderness and humour

What a gem of a book! I'd spotted the cover in a couple of bookstores and it did catch my eye, and then I started to hear good things about it so bought it in a recent little book buying spreee - yes another one!  And I'm so glad I did!

Such a simple storyline but if it's written so well that is all a reader needs!  In this book we follow Guylain Vignolles in his remarkably invisble life - he lives alone with his pet goldfish - and is known to count things as he walks to catch the train every morning.  But when he steps on that commuter train each morning he becomes the focus for the other passengers, as he has taken to reading random pages aloud ... one day it could be a recipe, the next it could be a murder mystery.  It soon becomes clear where he gets the random pages from which adds extra poignancy, and the power that his reading has over the other passengers is a delight.

He then discovers a diary from the mysterious Julie and he immediately becomes obsessed - he reads these aloud to the other commuters too, and it soon becomes clear to him that he must do all he can to find out her identity.

It was a magical read in its' simplicity, honesty, humour and humanity.  I can see how it has been compared to Amelie as it is purely enchanting and a must read!!