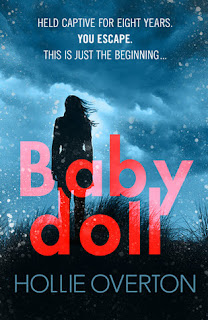 You've been held captive in one room, mentally and physically abused every day, since you were sixteen years old.

Then, one night, you realize your captor has left the door to your cell unlocked.

For the first time in eight years, you're free.

This is about what happens next ...

Lily knows that she must bring the man who nearly ruined her life - her good-looking high-school teacher - to justice. But she never imagined that reconnecting with her family would be just as difficult. Reclaiming her relationship with her twin sister, her mother, and her high school sweetheart who is in love with her sister may be Lily's greatest challenge. After all they've been through, can Lily and her family find their way back after this life-altering trauma?

Impossible not to read in one sitting, Baby Doll is a taut psychological thriller that focuses on family entanglements and the evil that can hide behind a benign facade.
Paperback, 288 pages
Published June 30th 2016 by Century

I received a copy of this via NetGalley and was immediately intrigued by the dark cover and the blurb.  How would someone cope after being held hostage for 8 years as it is just too much for us to comprehend.  Especially if you'd been beaten, raped and tortured for those years and never thought you'd get to see any of your family again.

The book starts with the shocking setting of Lily at the cabin where she'd been hidden away for all those years as she plotted yet again to find a way out for her and her daughter Sky.  Their captor is normally so diligent in his routine and care to attention, that it is somewhat of a shock when one day he forgets to padlock the door properly so Lily can make a bid for freedom.

Her family have been searching constantly for her since she went missing one day after school, so to find Lily on their doorstep 8 years later is a big shock for them all.  And this is where the book began to annoy me a little as their reactions were a little too 'clean' about what Lily had been going through.  Even Lily seemed too in control, and her daughter Sky too who had only known life in the cabin but there seemed very little impact on her wellbeing, only referenced to her wanting to 'go home' every so often.  Lilys' twin sister was the one who had the most extreme reaction to the events of the past 8 years and had suffered during her sisters disappearance as she always blamed herself after an argument over a jumper.  But her OTT turmoil to the events just began to annoy me as a reader, and it felt like the story was more about her than Lily at times.

I would have loved to have read more about the psychological effect that being tortured and kept hidden away for 8 years had on Lily and Sky but this almost seemed trivial to the story towards the shocking end, and yes that did make me gasp a little, but it just wasn't enough for me to save what could have been a really interesting concept of life after a traumatic event.