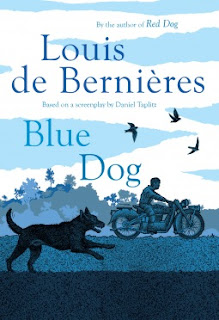 A charming story of a young boy and his dog adventuring through the outback. Prequel to the bestselling Red Dog.When a family tragedy means Mick is sent to the outback to live with his Granpa, it looks as if he has a lonely life ahead of him. The cattle station is a tough place for a child, where nature is brutal and the men must work hard in the heat and dust. However, after a cyclone hits, things change for Mick. Exploring the flood waters, he finds a lost puppy covered in mud and half-drowned. Mick and his dog immediately become inseparable as they take on the adventures offered by their unusual home, and the business of growing up, together.In this charming prequel to the much-loved Red Dog, Louis de Bernières tells the moving story of a young boy and his Granpa, and the charismatic and entertaining dog who so many readers hold close to their hearts.

Lucky enough to win a copy of this beautiful little book from the beautiful people at Vintage Books via their Twitter page and when I found out I had won a copy before the publication date, I knew I had to read it straight away!

It's only a short little novella, but it sure packs a punch as it tells the story of Mick who is sent to live with his Granpa in the middle of nowhere in Australia, after the death of his father sent his mother round the twist with grief.  It is only meant as a temporary measure until she is feeling better and released from hospital, but Mick soon settles into the way of life and is living the dream of most young boys by being able to explore his surroundings on his own most days - mixed in with a little bit of schooling!

But most of the lessons he learns are from his Granpa and the workers on the farm, and it is so pleasing to read of the bond that they build up, despite not having seen each other for so many years.  There are also many creatures he discovers and the dog, Blue, really does capture his heart after he rescues the puppy from the flood waters.

Enjoyed every minute of this adventure, and I hadn't read The Red Dog, of which this is the prequel to, so will be tracking it down to enjoy more of the story.