THE INVITATION by LUCY FOLEY 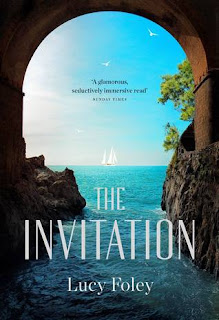 The world’s darkest hour had made her a ghost. Only he can see the light…

Rome, 1953: Hal and Stella meet by chance, two outcasts in a city far from home. Or perhaps it was the hand of the gods that night as the Eternal City welcomed the beautiful elite to its rooftops. It’s a bright awakening for Hal, he believes he’s found the love of his life – his Stella, his star.

To his dismay, the mysterious girl disappears as quickly as she swept in, and Hal’s life as a journalist falls back into its familiar routine. But when he’s asked by an Italian Contessa to assist on a trip of a lifetime – acting as the reporter on a tremendous yacht, skimming its way along the Italian Riviera towards Cannes film festival, the most famous movie stars and directors of the day as its cargo – Hal can’t believe his good fortune. Especially when a familiar beauty becomes passenger.

Yet not all that glitters is gold, for many secret histories lurk beneath the surface of these Bright Young Things. Stella is bound to a powerful and profoundly dangerous man, and as Hal’s obsession grows with every passing wave, they sail closer towards a tragic fate . . .
Hardcover, 448 pages
Expected publication: July 14th 2016 by HarperCollins UK

The Hive - buy from your local bookstore

I was very lucky to have been sent a hardback copy of this book from the publishers, HarperCollins, so would like to thank them for giving me the opportunity to read and review this in return for a fair and honest opinion!

This book gets off to the perfect start with a stunning setting on the cover, and the insides are the perfect way to escape to the Italian Riviera from the comfort of your own home!  The locations are so glamorous aboard a yacht as it travels to Cannes, but there are also glimpses of not so exotic locations as the story flashes back to the two main characters' pasts.

The story revolves around Hal and Stella and how fate seems to bring them together at the right time.  They first meet in Rome for a night that both find it hard to forget, and then their paths meet again two years later aboard a yacht as it sails to a film premiere in Cannes.  Aboard the yacht are the most famous film stars and directors of the time, but Hal and Stella are the main focus of the story.

Hal is invited aboard by the Contessa to report on the glamorous lives of those on board for a magazine article.  And Stella is onboard as the wife of one of the wealthy investors of the film.

They both seem to have very different pasts that they are escaping from and as they spend more time together we get to see more flashbacks from their lives before and you can start to understand why they are so keen to forget and to move on.

I found the style of writing so evocative and appealing, so I was reluctant at times to put the book down as I was just swept along in the drama, mystery and romance of it all.  I hadn't read anything from Lucy Foley before but I will be adding her name to the list of Authors I will look out for in future.

Highly recommended if you love a story that is full of glamour, romance and some mystery! There's a little bit of everything in this story!