THE MUSE by JESSIE BURTON 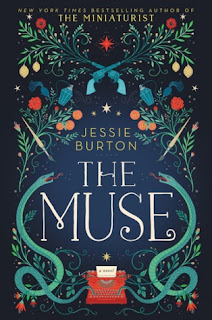 From the internationally bestselling author of The Miniaturistcomes a captivating and brilliantly realized story of two young women—a Caribbean immigrant in 1960s London, and a bohemian woman in 1930s Spain—and the powerful mystery that ties them together.England, 1967. Odelle Bastien is a Caribbean émigré trying to make her way in London. When she starts working at the prestigious Skelton Art Gallery, she discovers a painting rumored to be the work of Isaac Robles, a young artist of immense talent and vision whose mysterious death has confounded the art world for decades. The excitement over the painting is matched by the intrigue around the conflicting stories of its discovery. Drawn into a complex web of secrets and deceptions, Odelle does not know what to believe or who she can trust, including her mesmerizing colleague, Marjorie Quick.Spain, 1937. Olive Schloss, the daughter of a Viennese Jewish art dealer and English heiress, follows her parents to Arazuelo, a poor, restless village on the southern coast. She grows close to Teresa, a young housekeeper, and her half-brother Isaac Robles, an idealistic and ambitious painter newly returned from the Barcelona salons. A dilettante buoyed by the revolutionary fervor that will soon erupt into civil war, Isaac dreams of being a painter as famous as his countryman, Picasso.Raised in poverty, these illegitimate children of the local landowner revel in exploiting this wealthy Anglo-Austrian family. Insinuating themselves into the Schloss’s lives, Teresa and Isaac help Olive conceal her artistic talents with devastating consequences that will echo into the decades to come.Rendered in exquisite detail, The Muse is a passionate and enthralling tale of desire, ambition, and the ways in which the tides of history inevitably shape and define our lives.

buy from your local bookstore via Hive

I have been very lucky to have received a copy of this book via The Good Housekeeping Book Room group on Facebook.  They choose a book each month and then send out copies to a few members to help them read and review and I was chosen for their July pick - The Muse.

Confession time..... I have had a copy of The Miniaturist on my bookshelves since forever and I'm still not sure why I haven't got round to reading it yet, but I will definitely be bumping it up my TBR pile after my experience with The Muse.

From the stunning cover, a piece of art in itself, this book is an amazing journey through two timelines and the impact that one painting has on so many characters.

It is set around 1960's London and 1930's rural Spain and the way the story goes between both timelines works so well as there is so much going on, that each chapter seems to bring a new reveal and twist in the significance of a long lost painting.

In 1960's London, we follow Odelle who starts working as a typist in a London Art Gallery and is taken under  her boss' wing, Marjorie Quick, who seems to see something of herself in the new recruit.  But when Odelle has a friend who brings along a painting he wants more  information about to the gallery, Marjorie Quick seems to be in shock over the appearance of this piece of artwork and you start to wonder what connection she has to it.

The 1930's spanish timelines is a much slower pace and focuses on Olive who lives there with her art dealer father, and her mother.  They are soon joined by Isaac and Teresa who start to work for them and these characters soon add to the complexities of life in rural spain with war approaching.

I loved the way the timelines connected so well, so it never felt forced or rushed with all the different storylines combining so beautifully and I loved the fact that it was centred around the female characters.

I've often found myself looking at artwork and wondering about the story behind it, and The Muse is a perfect look at the secrets a single painting can contain and it has been an absolute pleasure to devour!! Highly recommended!!
Posted by Books and Me! at Friday, July 15, 2016