My inability to stop adding to the TBR pile continues!!  Is there any hope for me?! I'm thinking not!!  Maybe I just need to be a bit more creative on the storage ideas front - any hints and tips for storage ideas are most welcome!!  Or how to be more ruthless and learn to let go of more books!!  I just need help haha!!

So without further ado, here's a few of the books I've received/bought over the past week or so! 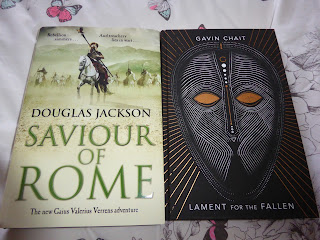 I was lucky to win a competition on Twitter on World Book Lovers Day from the lovely Jonathon and Hannah at @W5_Books and these two gorgeous books appeared in the post today!  Have to say that the cover of Lament For The Fallen by Gavin Chait is so stunning that I can't stop staring at it so am extremely intrigued to see if the insides are as equally stunning!!  And I haven't read anything from Douglas Jackson before so am fascinated to dive into this one!

Lament For the Fallen by Gavin Chait

Blurb. 'Father, tell me a story?' asks Isaiah, moments before a strange craft falls from the sky and smashes into the jungle near his isolated West African community. Inside the ruined vessel the villagers find the shattered body of a man. His name is Samara and he is a man unlike any the villagers have seen before - a man who is perhaps something more than human.
With his city home of Achenia hiding in the rubble left by a devastating war, Samara has fallen 35,000 km to earth in order to escape the automated hell of an orbiting prison called Tartarus. As he struggles to heal himself, he helps transform the lives of those who rescued him but in so doing attracts the attention of the brutal warlord who rules over this benighted, ravaged post-21st century land. He is not a man to be crossed, and now he threatens the very existence of the villagers themselves and the one, slim chance Samara has of finding his way home and to the woman - and the world - he loves.And all the while - in the darkness above - waits the simmering fury that lies at the heart of Tartarus . .

Saviour of Rome by Douglas Jackson

blurb   AD 72. Titus Flavius Vespasianus, known as Vespasian, is Emperor of Rome, but his grip on power grows increasingly fragile as economic disaster threatens.
The enormous riches from his Judaean campaigns are all but spent, legions go unpaid, and the yields from Rome's vital Spanish goldfields have fallen dramatically since the civil war.
Gaius Valerius Verrens is recently married and building a new home when the summons arrives from the Emperor.
Vespasian needs a man with the combined skills of a lawyer and a soldier to investigate what is happening in remote, mountainous Asturica Augusta where the authorities claim a bandit called The Ghost is ravaging the gold convoys. But when Valerius arrives in Asturica he faces a much more complex situation.
Stalked from the shadows he cannot tell ally from enemy, the exploited native tribes are a growing threat, and the tortured landscape itself seems capable of swallowing him up.
Gradually he finds himself drawn into a much wider conspiracy, one that could plunge the Empire into a new conflict and that will place him on a deadly collision course with his old friend and most dangerous adversary, the former gladiator Serpentius. 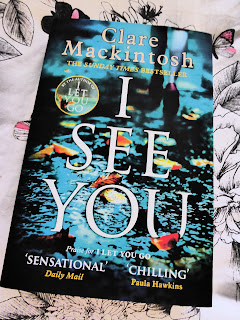 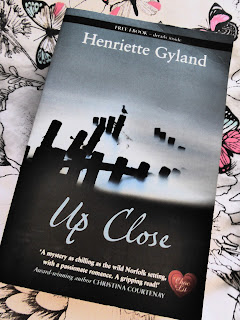 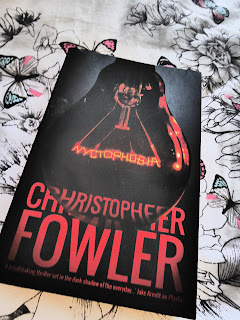 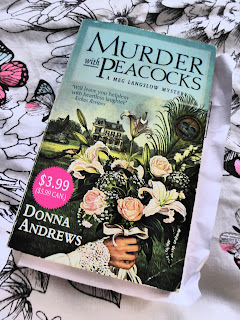 These 4 are books I've brought myself based on recommendations from friends online - they wouldn't lie to me would they!?

Clare Mackintosh - I See You...... I'm currently halfway through I Let You Go which she also wrote and am really enjoying that so when I saw her latest book on offer I just had to snap it up and am hoping it will be just as gripping!

Henriette Gyland - Up Close   - I love all the releases from the Choc Lit publishers so really intrigued to read this as the cover is so  mysterious and has me drawn in already!

Christopher Fowler - Nyctophobia - another book that comes highly recommended, even the scariness hasn't put me off although I hear I may think twice about turning the lights off once I've read this! eeeekkkk!!

Donna Andrews - Murder with Peacocks - A friend of mine sent me the link to this once she'd read it as she said I would love it so who am I to turn down good advice like that! 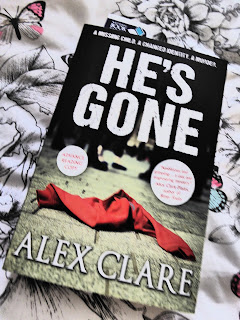 Blurb    How do you find a missing child when his mother doesn't believe you have the right to even exist? When Detective Inspector Roger Bailley returns to work as Robyn, all she wants is to get on with the job she loves while finally being herself. When toddler Ben Chivers is snatched from a shopping centre on her first day back at work, Robyn has to find Ben and herself as she deals with the reactions of her police colleagues, the media and her own daughter.

This was sent to me by the lovely people at Impress books and is due out in August and is a debut novel from Alex Clare and is pretty topical as it does focus on the recent gender dyshoria debate, so that will be interesting to see how it has been covered within this thriller


So just a few more added to the TBR pile - is there anyone else out there too scared to count up just how many books they have sitting around to be read?! I just can't bring myself to do it as I think I may frighten myself with the number, so I'll just continue to keep hiding them in my wardrobe and will just need to figure out a way to up my reading pace so I can get through a higher amount of books each month!!
Posted by Books and Me! at Friday, August 12, 2016