WHAT SHE NEVER TOLD ME by KATE McQUAILE 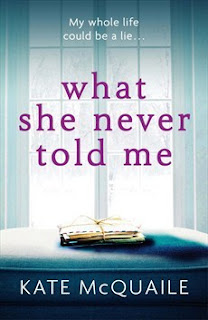 What do you do when you find out that your whole life could be a lie?'I talked to my mother the night she died, losing myself in memories of when we were happiest together. But I held one memory back, and it surfaces now, unbidden. I see a green postbox and a small hand stretching up to its oblong mouth. I am never sure whether that small hand is mine. But if not mine, whose?'Louise Redmond left Ireland for London before she was twenty. Now, more than two decades later, her heart already breaking from a failing marriage, she is summoned home. Her mother is on her deathbed, and it is Louise's last chance to learn the whereabouts of a father she never knew.Stubborn to the end, Marjorie refuses to fill in the pieces of her daughter's fragmented past. Then Louise unexpectedly finds a lead. A man called David Prescott . . . but is he really the father she's been trying to find? And who is the mysterious little girl who appears so often in her dreams? As each new piece of the puzzle leads to another question, Louise begins to suspect that the memories she most treasures could be a delicate web of lies.

Buy from your local bookshop online via Hive

I received a copy of this via the publishers, Quercus Books, in return for a fair and honest review.

Knew very little of this book going into reading it, and once i'd started reading it I really struggled to put it down as I was desperate to get to the bottom of the mystery that was plaguing the main character, Louise Redmond!

She always knew very little about her father, and when her mother passed away through illness it looked like Louise would always be unable to find out anymore. All she has is a recurring memory/nightmare about a green postbox and a hand reaching up to post a letter, but this has always confused her and never gets her any closer to finding out more.

There are many sub-plots involved in this story and they all combine together to add to the suspense and just illuminate how devastating a web of lies spun by one person can have such an effect on so many other people.

Really connected with Louise as a character as she was just so desperate to find out more about where she came from and who she was as a person, and the flashbacks she sometimes had never added up to the childhood she remembered and she finds herself on a journey between London and Ireland as she tries to put the pieces together of the jigsaw puzzle that her life had become.

Had me gripped from start to finish as the author cleverly added different characters to the story with their own take on her theories and new discoveries as she cleared her mothers' house, and the ending was particularly clever and really well written so I am definitely going to be looking out for more from this author in the future as it is a highly impressive debut!