Howdy!!   Here again to wrap up how my week in books has been!  Seem to have slowed down again on the reading front which is annoying, but not as annoying as the cold I've had since last Sunday and which shows no sign of wanting to 'naff off' anytime soon!!  Chocolate cake is a cure for colds right???!!

So what has everyone been reading this week??! Anything good to share?! Always happy to receive new recommendations to add to the TBR mountain!   And my book buying ban is still 100 % successful this week - it can be done!! And that even included a wander round Waterstones and a couple of charity shops on a recent outing to Southend... it was tough and I was temped but I was strong lol!!

So here's a look at the books that have captured my imagination this week!

THE ICE BENEATH HER by CAMILLA GREBE 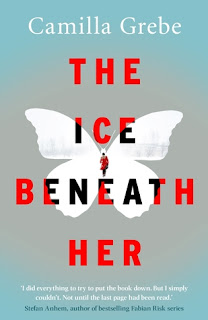 For fans of Jo Nesbo and The Bridge, The Ice Beneath Her is a gripping and deeply disturbing story about love, betrayal and obsession that is impossible to put down. Fast-paced and peopled with compelling characters, it surprises at every turn as it hurtles towards an unforgettable ending with a twist you really won't see coming . . .A young woman is found beheaded in an infamous business tycoon's marble-lined hallway.The businessman, scandal-ridden CEO of the retail chain Clothes & More, is missing without a trace.But who is the dead woman? And who is the brutal killer who wielded the machete?Rewind two months earlier to meet Emma Bohman, a sales assistant for Clothes & More, whose life is turned upside down by a chance encounter with Jesper Orre. Insisting that their love affair is kept secret, he shakes Emma's world a second time when he suddenly leaves her with no explanation.As frightening things begin to happen to Emma, she suspects Jesper is responsible. But why does he want to hurt her? And how far would he go to silence his secret lover?

This was a fascinating and gripping read that had me guessing, often wrongly!, along the way as to how it would turn out and who was involved in the gruesome murders.  Really loved the way it also went into the backgrounds so well of the main characters so you really got to understand them and their reactions throughout so can highly recommend this if you are looking for a good thriller to read! and a pretty stunning cover to boot as well!

CHRISTMAS AT THE LITTLE VILLAGE BAKERY by TILLY TENNANT 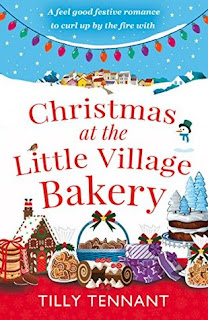 It’s time to get toasty by the fire with a glass of mulled wine and a slice of chocolate yule log sprinkled with a little romance. Welcome to Christmas at the Little Village Bakery. Snow is falling in Honeybourne and Spencer is bringing home his American fiancée Tori for a traditional English Christmas with all the trimmings. But when his hippie mum and dad meet her high-maintenance parents, sparks of the wrong sort start to fly. Then Spencer bumps into his first love Jasmine and unexpected feelings come flooding back. Millie is run off her feet with Christmas orders at the Little Village Bakery and new baby Oscar. Thank goodness her cousin Darcie is here to help her. Although she does seem to be rather flirty with Millie’s boyfriend Dylan. Will Darcie ever find true love of her own? And is marrying Tori a terrible mistake for Spencer if his heart is with someone else? A heartwarming Christmassy romantic comedy, perfect for fans of Carole Matthews and Millie Johnson.

Never too early to read a Christmas book in my eyes, so when I found out the tales from Honeybourne were going to continue with a Xmas story I couldn't wait to dive in! If you've read The Little Village Bakery then you will enjoy returning to some of your favourite characters although this story does feature another couple more.  A nice easy read which did feel a little flatter than the first book, but it was still so much fun and full of wonderful characters and I'll be looking for future visits to Honeybourne for another fix soon - hopefully!

YOU'RE THE ONE THAT  I WANT by ANGELA BRITNELL 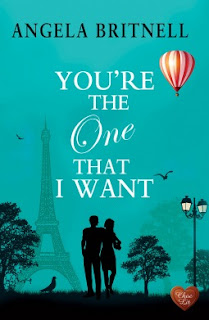 What if you didn’t want to fake it any more?When Sarah, a teacher from Cornwall, and Matt, a businessman from Nashville, meet on a European coach tour, they soon find themselves in a relationship …Except it’s a fake relationship. Because Matt is too busy for romance, and Sarah is only trying to make her cheating ex-husband jealous … isn’t she?As Matt and Sarah complete their tour of Europe, they do all the things real couples are supposed to do – from visiting fairy-tale castles in Germany to recreating the scene from Romeo and Juliet in Verona. And, of course, for every picturesque destination there’s a loved-up selfie and Facebook post to match.But as their holiday comes to an end, Sarah and Matt realise that they’re not happy with their pretend relationship. Perhaps, they want the real thing.

I was lucky enough to read this at the manuscript stage through the publishers, Choc Lit, so was extremely pleased to see it get released into the world and it was just as much fun reading it again as the first time I discovered Sarah and Matt!  They are such lovely characters and they have a spark the moment they meet on this coach holiday they go on with their mothers, that you just love watching their flirting over their 'fake facebook' romance, and the whole read was just a treat from start to finish!

GIRL HAVING A BALL by RHODA BAXTER 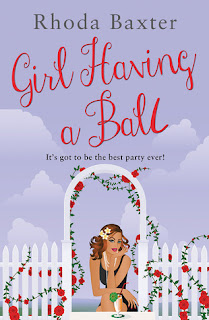 What if you had to learn to stand on your own feet?Although Stevie lost her parents when she was very young, she’s always been able to rely on her brother, Marsh. But now Marsh is married and Stevie feels like she is losing him too. Determined to prove her independence, Stevie sets about transforming her life, giving up her dead-end job and following her passion for events management.Her first assignment takes her to a stunning manor house in Oxford where she is tasked with organising a charity ball on a shoestring. Between canapé worries, celebrity guests and trying to keep the hyper-critical Lady Beryl happy, Stevie’s teenage crush, Tom, resurfaces to confuse things even further.But ‘poor needy little Stevie’ is now ‘Stevie the strong woman’ and she won’t let a man get in the way of her dreams – will she?Second novel in series, sequel to Girl on the Run.

Another book from Choc-Lit publishers that I've been lucky enough to read before  publication, and it was another fab read!  It did take me a while to warm to Stevie as she did come across as a little annoying to begin with, but once you start to see what she has been through and how she is trying to move on then you soon find yourself on her side!  Loved the whole cast of characters as they were all given plenty of time in the book to see their stories unfold too!  This book is a sequel to Girl On The Run, which follows the story of Marshall meeting his wife Jane, but I haven't read that (hoping to remedy that very soon though!) so this did work perfectly well as a stand alone book! Highly recommended!!

SO, not a bad little week for reading but I know I should be reading more!! The TBR pile is not decreasing by the amount it should be so hopefully I can fit some extra reading in over the weekend - rain forecast on Saturday so there's a perfect reading day on the calendar already!!