Am extremely happy and  excited to be able to share the latest Choc Lit cover real for One Dark Lie by Clare Chase..... are you ready???!!! Are you sure??!

ONE DARK LIE by CLARE CHASE 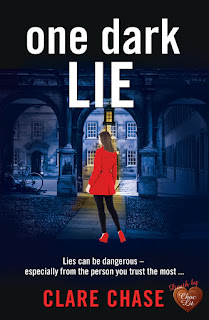 The truth can hurt, and sometimes it leads to murder …

After becoming embroiled in a murder investigation, Nate Bastable and Ruby Fawcett have decided to opt for the quiet life. But crime has a habit of following them around.

When her work dries up, Ruby finds herself accepting a job researching and writing about Diana Patrick-John, a colourful and enigmatic Cambridge academic. Simple enough. But then there’s the small fact that Diana was found dead in suspicious circumstances in her home – the very place where Ruby has now been invited to stay.

As she begins to uncover Diana’s secret life, Ruby’s sleuthing instinct kicks in, leaving her open to danger and retribution. But can she rely on Nate to support her? Especially when his behaviour has become increasingly distant and strange, almost as though he had something to hide …

One Dark Lie is published by Choc Lit and is now available to pre-order as an eBook on iBooks.

Told you it was exciting!!  Definitely sounds like one of those 'must read' crime thrillers so please add it to your TBR lists!!!