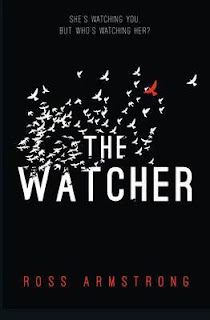 The Girl on the Train meets Rear Window, The Watcher is an absolutely addictive and on trend commercial psychological suspense read, with a captivating unreliable narrator and some powerful narrative twists. She's watching you, but who's watching her? Lily Gullick lives with her husband Aiden in a new-build flat opposite an estate which has been marked for demolition. A keen birdwatcher, she can't help spying on her neighbours. Until one day Lily sees something suspicious through her binoculars and soon her elderly neighbour Jean is found dead. Lily, intrigued by the social divide in her local area as it becomes increasingly gentrified, knows that she has to act. But her interference is not going unnoticed, and as she starts to get close to the truth, her own life comes under threat. But can Lily really trust everything she sees?

Pre-order your copy from Hive.co.uk - support your local bookshop online

She's watching you. But who's watching her?.........This tagline perfectly sums up this rather chilling thriller that i've just had the pleasure to read! Definitely a book full of twists and turns and quite a sinister undertone that leaves you guessing right up until the last few pages!This is the story of Lily, and told from her point of view. Life is seemingly perfect for her and her husband, Aiden, as they live in London in their lovely new build flat. As in many parts of London, they overlook old blocks of flats that are set for demolition and this book shines a light on the 'them and us' situation that many places suffer from nowadays.Lily has some binoculars that she used for birdwatching, but she soon becomes more attracted to neighbour watching though windows - own up! We've all done it!! - and this soon begins to take over her reality and is all she tends to think about.And when a student goes missing in the neighbourhood and another neighbour is murdered, Lily is convinced she has seen things through her window that could help solve the case and takes it upon herself to investigate more with no concern for her own safety! This is when the book starts to take on an extra creepy level as some of the characters she meets aren't the most pleasant and you begin to wonder why Lily is putting herself through this and not letting the police do the work instead.But the more she interferes, the more that she seems to be making trouble for herself and there is a real sense of fear as to just how far she is willing to go to prove that she saw the perpetrator. And those around her are noticing the changes in Lily too and start to question her motives.I really enjoyed the style of writing with this book as it didn't go over the top to state facts and grab your attention. And the pace never seemed to let up either so it was often quite difficult to put down!!A fascinating debut thriller which I can highly recommend if you love a book that keeps you guessing from start to finish! Peeking out of my window at the neighbours will never be the same again!!