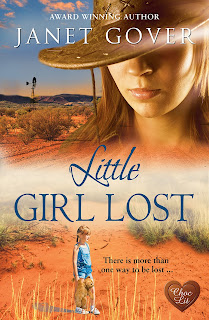 Janet Gover’s new Coorah Creek novel is now available to purchase in paperback. To celebrate we’ll be introducing you to characters from the book. Today on my blog, you can ‘meet’ Tia Walsh.
Janet Gover: Tia Walsh drives a huge ore truck at a big open cut mine; the only woman in a man’s world. I wanted to write as heroine who was strong and tough but also vulnerable and a little bit frightened. And in her past, Tia has much to be frightened of…

So, whadda you say? Can I buy you a beer?’
‘No, thanks.’ Tia kept walking.
‘But why not? What harm can it do? It’s just a drink. Between friends. Workmates, even.’
‘And that’s what you’ll tell your wife when you go home next week?’
There was a smattering of laughter from the nearby men. The one walking next to her had the grace to look slightly abashed.
‘If not him, how about me? I’m not married,’ his companion offered.
‘No. Sorry.’
Didn’t these guys ever get sick of asking? It was annoying.
‘Tia has the good sense to recognise a bunch of losers when she sees them,’ Blue stepped in, with a mock punch at Tia’s admirers. ‘Come on, the first one is on me.’
There was a rumble of approval from the group. Blue caught Tia’s eye and she smiled her thanks.
‘Don’t worry, any day now these thickheads will get the message,’ Blue said to her as he led his team away.
Tia hoped so. All these attempts to get her on a date were getting a bit annoying, although some small part of her that she kept hidden deep behind her rough exterior might be a little bit flattered. But accepting any of the offers was out of the question.
‘Have one for me,’ she said as she left them at the gates. Her refusal was as much for their sakes as it was for hers. They had no idea of what she had been and who she really was. If they knew the baggage she carried they’d avoid her like the plague, which would be the best thing for everyone. It was far too soon. She still didn’t know if she was truly free of her past. Getting close to her was dangerous for everyone.
She walked slowly back to the residential compound. Dusk was falling, but that had little effect on the energy-sapping heat. Inside her trailer, she splashed some water over her face and grabbed the black and red motorcycle helmet that was sitting on her table.
The Harley was parked next to her trailer. The hog had created as much of a stir as Tia herself the day she arrived, but the men had quickly learned the bike was as out of their reach as she was.
She ran a hand over the black and red flames painted on the tank, feeling the thin layer of gritty dust that seemed to settle there within seconds of her cleaning the machine. She shrugged. There was nothing she could do about the dust. And it wasn’t as if she loved the bike. She didn’t. She loved what the hog represented. She’d spent too much time as a pillion passenger on this bike, forced to hold on for dear life to a man she hated as he broke every rule in the book. And not only the road rules. She was done with that now. Even though she might have preferred a car, riding the bike was a constant reminder that she was a new person now. In the front seat. In control. She never ever wanted to forget how she had turned her life around. It hadn’t been easy. It still wasn’t. But she was working on it.
She slung her leg over the Harley and straightened it off its stand. She pulled her gloves on before pressing the starter on the handlebars. The engine roared instantly into life. She slipped the helmet over her head and twisted the throttle to set the big bike into motion.
Tia paused where the mine road met the highway. North was the town. There were people there. Probably good people with whom she could be friends. But she wasn’t ready for that. That cop was in the town too. She needed to avoid him in case he got curious about her. Or the Harley. The last thing she needed was him sticking his nose into her life. Instead, she turned the bike south, away from the town. She hadn’t explored the Birdsville Road yet. It couldn’t hurt to know where that road led. In case she had to run again.
There was something to be said for outback roads. They were long and straight and mostly empty. A girl on a motorcycle could really let her hair down. Tia opened the throttle. The big engine roared like the monster it was, as the bike gathered speed. The noise was almost loud enough to drown out her thoughts and her memories. The rushing wind was almost enough to make her forget the dark stuffy rooms and the stifling smell of lost souls. The feel of the powerful machine was almost enough for her to forget the feel of cruel hands reaching for her in the darkness, and the sound of harsh laughter. The rush of adrenaline was almost enough to make her forget the rush from the weed and the speed.
Almost, but not quite.
She twisted the throttle again, forcing the Harley to even greater speeds, right down the dotted white line in the centre of the road. Ahead of her, a truck suddenly appeared through the heat haze. A road train pulled by a huge blue and white Mercedes prime mover. Their combined speed was enough to make it appear that she was driving headlong into a wall and she was about to die in a terrible scream of twisted and torn metal.
At what seemed the last second, she twisted the handlebar a fraction and raced past the huge truck on into the slowly gathering dusk.

Blurb:
When a little girl goes missing, an entire town comes together to find her ...
When Tia Walsh rides into the small town of Coorah Creek on a Harley-Davidson, Sergeant Max Delaney senses that everything about her spells trouble. But Tia's trouble is not all of her own making, and the dangerous past she tried to leave behind is hot on her heels.
Sarah Travers has returned home after three years of college to find that her parents have been keeping a devastating secret. Her childhood crush, Pete Rankin, is facing his own struggle with a harsh reality that will take him away from the girl and the life that he loves.
Tia, Max, Sarah and Pete are all trying to find their future, but when a little girl goes missing in the harsh outback, nothing else matters except finding her safe ...