A Gentleman in Moscow by Amor Towles - Book Review 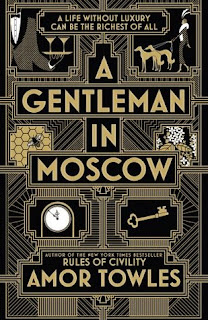 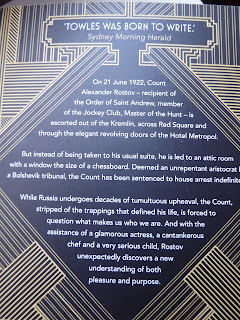 In 1922 Count Rostov is deemed an unrepentant aristocrat by a Bolshevik tribunal He is sentenced to house arrest in The Metropol a grand hotel across the street from the Kremlin. Rostov an indomitable man of erudition and wit has never worked a day in his life and must now live in an attic room while some of the most tumultuous decades in Russian history are unfolding outside the hotel s doors. Unexpectedly his reduced circumstances provide him a doorway into a much larger world of emotional discovery.Brimming with humour a glittering cast of characters and one beautifully rendered scene after another this singular novel casts a spell as it relates the Count s endeavour to gain a deeper understanding of what it means to be a man of purpose.

About the Author -  Amor Towles was born and raised in the Boston area. He graduated from Yale University and received an MA in English from Stanford University. An investment professional for over twenty years he now devotes himself full time to writing. Towles lives in Manhattan with his wife and two children.

Where to begin??! This is one of those books that I don't think any review can do it justice! It has to be read. To be savoured. To be lived! And the style of writing and attention to detail lets you do that with ease! Amor Towles has captured the essence of his main character, the wonderful Count Alexander Rostov, and his situation, sentenced to house arrest at the magnificent Hotel Metropol indefinitely, with brilliant clarity.
As we watch the Count over the 30 years that follow we are introduced to some amazing characters who seem to teach the Count, and the reader, a new perspective on life and the history that is unfolding outside the Hotel doors. It makes Count Rostov re-evaluate all he thought he knew, and what makes life worth living! He talks to the pigeons and the hotels one eyed cat, he makes friends with the staffA completely charming and captivating read and it was an absolute pleasure and delight to spend time in the company of these people with their amazing insights and a look back at life in ever changing Russia through the Second World War, Stalin and beyond. It is a very insightful, and often bittersweet, look at the way the world changes outside while he is stuck inside, but to him the Hotel becomes his 'world' and still manages to teach him things about the human race.
This book made me laugh and cry and I would just like to thank the author for an astonishing read.  If you get the chance to read this book, then do it!! You will not regret it!!