The Book of Mirrors by E.O. Chirovici 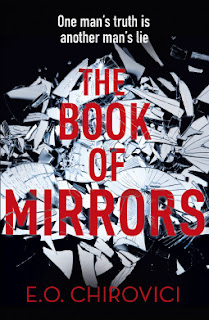 
ONE MAN'S TRUTH IS ANOTHER MAN'S LIE.When big-shot literary agent Peter Katz receives an unfinished manuscript entitled The Book of Mirrors, he is intrigued.The author, Richard Flynn is writing a memoir about his time at Princeton in the late 80s, documenting his relationship with the famous Professor Joseph Wieder.One night in 1987, Wieder was brutally murdered in his home and the case was never solved.Peter Katz is hell-bent on getting to the bottom of what happened that night twenty-five years ago and is convinced the full manuscript will reveal who committed the violent crime.But other people’s recollections are dangerous weapons to play with, and this might be one memory that is best kept buried

Also writes under Eugen O. Chirovici and Eugen Ovidiu Chirovici. Eugen O. Chirovici had a career in mass-media, running a national daily newspaper and then a TV news channel. He has published over 1,000 articles in Romania and abroad. He currently holds three honorary doctorates (in Economics, Communication & History) and is a member of the Romanian Academy of Science. He is the recipient of several prizes for journalism. He lives in both the UK and New York City.

I was intrigued when I received a copy of this book via the publishers, in return for a fair and honest review, as it sounded like the perfect mind games 'whodunnit' crime story and so it proved to be!!It's a very interestingly told story from the viewpoint of 3 different characters - a writer, a literary agent and an ex-detective - over a number of years and plays heavily on the part that memory plays on all of us! How time can change your perception of events, bad memories surpressed, and a good old fashioned lie that some people manage to convince themselves was the truth.When a literary agent receives part of a manuscript he is left wondering whether it is just a story, or an actual confession to the murder of a Professor many years earlier. The more he delves into the background of the writer and those around the Professor at the time, the more he is intrigued and is often left wondering, as is the reader, just who is telling the truth and who to believe. Who did actually murder the Professor? Found the different viewpoints a really interesting concept into telling the story of this murder and it gives you plenty of background into those involved as the layers are slowly peeled away at what exactly had happened all those years ago.Have to admit to being a little let down by the last few chapters as after such an excellent build up of circumstances, it all just seemed to fall a little flat and rushed and that did disappoint after an excellent look at the role that memories have on us all.

It is a slow burner of a book that leaves you questioning many of the characters and their versions of events and I think the pace is perfectly pitched at how much it reveals and when.  My mind changed many times over the pages of who I believed and didn't!Still found it to be an absorbing thriller and the perfect read for a rainy weekend!
Posted by Books and Me! at Sunday, January 15, 2017