The Keeper of Lost Things by Ruth Hogan - Book Review 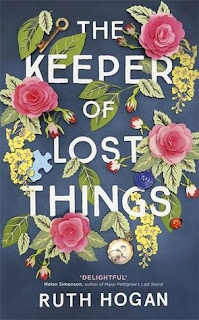 A charming, clever, and quietly moving debut novel of of endless possibilities and joyful discoveries that explores the promises we make and break, losing and finding ourselves, the objects that hold magic and meaning for our lives, and the surprising connections that bind us.Lime green plastic flower-shaped hair bobbles—Found, on the playing field, Derrywood Park, 2nd September.Bone china cup and saucer-Found, on a bench in Riveria Public Gardens, 31st October.Anthony Peardew is the keeper of lost things. Forty years ago, he carelessly lost a keepsake from his beloved fiancée, Therese. That very same day, she died unexpectedly. Brokenhearted, Anthony sought consolation in rescuing lost objects—the things others have dropped, misplaced, or accidentally left behind—and writing stories about them. Now, in the twilight of his life, Anthony worries that he has not fully discharged his duty to reconcile all the lost things with their owners. As the end nears, he bequeaths his secret life’s mission to his unsuspecting assistant, Laura, leaving her his house and and all its lost treasures, including an irritable ghost.Recovering from a bad divorce, Laura, in some ways, is one of Anthony’s lost things. But when the lonely woman moves into his mansion, her life begins to change. She finds a new friend in the neighbor’s quirky daughter, Sunshine, and a welcome distraction in Freddy, the rugged gardener. As the dark cloud engulfing her lifts, Laura, accompanied by her new companions, sets out to realize Anthony’s last wish: reuniting his cherished lost objects with their owners.Long ago, Eunice found a trinket on the London pavement and kept it through the years. Now, with her own end drawing near, she has lost something precious—a tragic twist of fate that forces her to break a promise she once made.As the Keeper of Lost Objects, Laura holds the key to Anthony and Eunice’s redemption. But can she unlock the past and make the connections that will lay their spirits to rest?Full of character, wit, and wisdom, The Keeper of Lost Things is a heartwarming tale that will enchant fans of The Particular Sadness of Lemon Cake, Garden Spells, Mrs. Queen Takes the Train, and The Silver Linings Playbook.

This was an absolute delight of a read! Found it to be charming, emotional, insightful and fun! Not often that a story can mix all those qualities so well!We follow the story of Anthony Peardew who finds himself collecting up items he finds on his travels - be that on a train, or by a park bench. These items are all catalogued and kept in his study which is off limits to his housekeeper Laura, who is intrigued but respects the privacy he demands.We also see the story through the eyes of Laura who has her own tales of a troubled personal life, but all seems brighter when she started working for Anthony, but she knows he isn't getting any younger and finds herself worried for the future. It is a really touching relationship between the two and upon his death she finds that she inherits his home, her sanctuary, and all that is inside - and that includes the Lost Things which he wants her to try and find their rightful owners.Throughout the story we also hear the story of Eunice during the 1970's and on, and you do wonder about the significance of this storyline but it is cleverly woven in and provides another insight and interesting storyline.  One of my major loves of this book as the character of Sunshine. She is a wonderful breath of fresh air with her innocence and outlook and she seems to have an extraordinary gift for picking up on the emotions behind the Lost Things.  And she understands the healing powers of a good cup of tea!I really loved the flow of this story - it is full of poignant stories that has you thinking about the stories attached to random items as they must have meant something to somewhere sometime! As Laura, Sunshine and Freddy the gardener begin their quest to reunite items the significance of the task that Anthony set them becomes clearer and re-awakens some old ghosts.Beautiful debut and will definitely be looking out for future Ruth Hogan books!