All Our Wrong Todays by Elan Mastai - book review 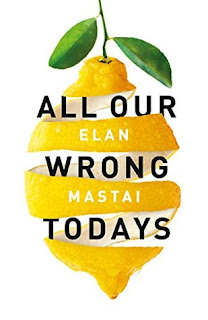 THE BLURB
When Tom loses the love of his life, time travel seems like the only answer. . . what could possibly go wrong?

Elan Mastai's breakthrough novel brings a whole new dimension to a classic love story
So, the thing is, I come from the world we were supposed to have.
That means nothing to you, obviously, because you live here, in the crappy world we do have.
But it never should've turned out like this. And it's all my fault - well, me and to a lesser extent my father.
And, yeah, I guess a little bit Penelope.
In both worlds, she's the love of my life. But only a single version of her can exist.
I have one impossible chance to fix history's greatest mistake and save this broken world.
Except it means saving one Penelope and losing the other forever - and I have absolutely no idea which to choose . . .
Praise for All Our Wrong Todays
'A thrilling tale of time travel and alternate timelines with a refreshingly optimistic view of humanity's future'
Andy Weir, author of international bestseller The Martian
'A novel about time travel has no right to be this engaging. A novel this engaging has no right to be this smart. And a novel this smart has no right to be this funny. Or insightful. Or immersive. Basically, this novel has no right to exist."
Jonathan Tropper, New York Times bestselling author of This Is Where I Leave You and One Last Thing Before I Go
'Elan Mastai has conjured up a witty and freewheeling time-traveling romance that packs an emotional wallop.All Our Wrong Todays is a page-turning delight'
Maria Semple, author of Today Will Be Different and Where'd You Go, Bernadette

“All Our Wrong Todays” is my first novel, but I’ve been working for the past 15 years as a screenwriter. I’ve written movies for both independent production companies and the Hollywood studios, including scripts for Fox, Sony, Warner Brothers, and Paramount. My most recent film is “What If”—also known as “The F Word”—a comedy starring Daniel Radcliffe, Zoe Kazan, Adam Driver, Mackenzie Davis, Megan Park, and Rafe Spall, directed by Michael Dowse. I was fortunate to win the Canadian Academy Award and the Writers Guild of Canada Award for my screenplay. I was born and raised in Vancouver, British Columbia and currently live in Toronto, Ontario with my wife and kids and an Australian Shepherd named Ruby Slippers.

Wasn't really sure what to expect when I started this! I don't read that much sci-fi and seeing the time travel element of this story had me a little worried as to what was in store for me as a reader - I just wish I could send myself back in a time-machine now and start reading this all again so I can savour it all once more!! Loved it!Tom Barren lives in 2016 - but a 2016 unlike ours! It is full of automated life, decisions made for you - a world where everything is perfect. Sounds idyllic?! Not for Tom and he's nostalgic for the real world of good and bad experiences. Tom is the perfect character to be the narrator of this story as he's the idiot to his genius father - never seemingly good enough and missing his beloved mother. So we get to enjoy and share his every thought and action as he tries to live up to something he isn't - he's not quite sure what he's supposed to be so when a chance to achieve some respect from his father by travelling back in time to witness the moment in time that changed the world as we know it - Lionel Goettreider invented the future in 1965 and he is the most famous man in the alternate 2016 timeline as his vision became their reality. So what happens if the impossible happens and we could travel back in time to witness those moments in time that we all know so much about? Tom is about to find out and things aren't all as he imagined - the genius plan had some pretty big flaws! And then what happens when you return from that moment and your version of 2016 has changed beyond recognition?! Full of people you know, but don't know at all?! This is more than a sci-fi/time travel novel as it features a lot of human emotion as he deals with love, grief and all those self doubts that we as humans often feel. And it is also very funny!   It is written in a really punchy way and never gets bogged down in too much 'geeky' detail and that is what kept me engrossed from start to finish. I loved the Tom character along with Penelope too who had her own dreams but her destiny was also changed by a quirk of fate and, like life, leads on to new experiences and dreams to unfold.

This exceeded my expectations so I can highly recommend it for those of you looking for something a little out of the ordinary!
Posted by Books and Me! at Monday, February 27, 2017