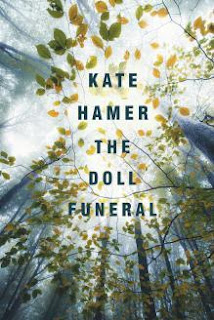 My name is Ruby. I live with Barbara and Mick. They're not my real parents, but they tell me what to do, and what to say. I'm supposed to say that the bruises on my arms and the black eye came from falling down the stairs.

But there are things I won't say. I won't tell them I'm going to hunt for my real parents. I don't say a word about Shadow, who sits on the stairs, or the Wasp Lady I saw on the way to bed.

I did tell Mick that I saw the woman in the buttercup dress, hanging upside down from her seat belt deep in the forest at the back of our house. I told him I saw death crawl out of her. He said he'd give me a medal for lying.

I wasn't lying. I'm a hunter for lost souls and I'm going to be with my real family. And I'm not going to let Mick stop me....

As a fan of The Girl in the Red Coat, I have been eagerly awaiting this next release from Kate Hamer and I've just had a wonderful but dark journey whilst reading the story of Ruby.WE meet Ruby in 1983 when she is living with Barbara and Mick (boo hiss!) but she isn't a happy young girl after suffering at the hands of the ghastly Mick and is determined to find out who her real parents are and find out the truth to her past. Barbara is completely under the control of Mick so there is no real help for the abuse that Ruby has to endure and you can't help but feel so much sympathy for the young misfit.WE also follow the storyline from 1970 and the story of Anna which puts the current situation into context and we are able to see Rubys' past before she existed.Ruby has always been drawn to the forest and also has the ability to see 'shadow' people and this is another fascinating and dark twist to the plotline. She is also drawn to another wandering soul, Tom, and gets close to him and his family as they all try and search for answers to their past and find some meaning to their existences. The 'Shadow' also has a voice in this story and that is extremely dark and unnerving to read at times.This is a slow burner of a book with lots that make you think and for me it was often quite an unsettling read as you never knew for sure what was round the corner. You also felt the torment that both Ruby and Anna go through as young girls which is often quite distressing and harrowing as they encounter many trying times and many of which make no sense.I loved the dark and other worldly elements to this story and had to stay up late to finish reading it as the characters had me under their spell and I couldn't settle until I'd read to the end! If you like your stories a little different to the norm then I highly recommend this one!

Thankyou to the publishers for supplying me with an early copy in return for a fair and honest review.
Posted by Books and Me! at Wednesday, February 15, 2017