We Were The Lucky Ones by Georgia Hunter - Book Review 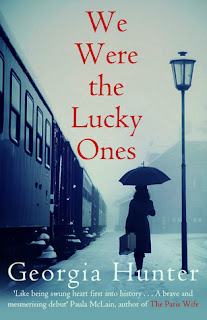 ‘Like being swung heart first into history . . . A brave and mesmerising debut’ Paula McLain, author of The Paris Wife
From the jazz clubs of Paris and Kraków’s most brutal prison, to the ports of Northern Africa and the farthest reaches of the Siberian gulag, We Were the Lucky Ones expresses how in the darkest of times the human spirit can find a way to survive, and even triumph.

'By the end of the Holocaust, 90 per cent of Poland's three million Jews were annihilated; of the more than 30,000 Jews who lived in Radom, fewer than 300 survived.

The Kurc family shouldn't have survived the Holocaust.  In the spring of 1939 three generations are living relatively normal lives in Poland, despite the hardships that Jews face.  When war breaks out and the family is cast to the wind, the five Kurc siblings do everything they can to find their way through  a devastated continent to freedom.

Wow! Feel extremely privileged after reading this extraordinary story of the Kurc family - 3 generations of Jews - and their experiences of life as a Jewish family leading up to and during the Second World War. The author has based the characters on the real life story of her own family and that just makes this an even more powerful book of the horrendous chapter of history and how those living through it find the strength to keep living.The family involved are full of amazing stories and characters and each journey you follow with them brings home the fear, the despair, the brutality and the slight glimmers of hope and bravery that keep the human spirit fighting to survive.In between certain chapters too you also get a glimpse of 'reality' with inserts of the history timeline as to what was happening and where and I found that such a clever and poignant way of bringing the story even more to life, and to give background as to what different areas were facing at the time.The parallel of people trying to carry on with life as normally as they could, and the horrors of what was happening around them in neighbouring districts was heartbreaking to read at times and brought home the fine line between life and death.There are many horrific scenes that were difficult to read but there were also odd moments of humour as the family seemingly sought out to block out all the bad. The lengths that many non-Jews went to in helping those fleeing persecution was also heartwarming when you realised the danger they were putting themselves in if they got caught.This was an absolutely stunning read that really needs to be read for yourself to fully appreciate and it was also wonderful to read the Author's note too explaining all about her family that she based these characters on. A must read!!

Thankyou to the publishers and author for an advanced reading copy
Posted by Books and Me! at Saturday, February 11, 2017