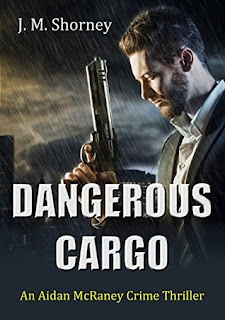 Extremely delighted to be taking part in the Blog Tour this week for this fast paced, gritty and exciting crime thriller. Aiden McRaney is back for the 4th installment in the series - but this book can easily be read as a stand alone!

Aidan McRaney is trying to stay away from his shadier past in this James Bond style thriller, but the offer of fifteen thousand pounds from Agency boss Nick Lombardi is too good to pass up. Lombardi needs someone to infiltrate the lair of ‘The Widow’. No agent has survived previous missions and Lombardi believes it’s McRaney’s knowledge of the criminal underworld that will give him the edge. An arms dealer, The Widow is in league with the L.A. Mafia and has bought a house on a remote island off the Cornish coast, far enough away from the mainland where the arms can be both smuggled and tested. When Don Giorgio Avonicci arrives, accompanied by his female bodyguard, McRaney finds it’s not just the weapons being tested but his commitment to his wife in London. This is the fourth book in the Aidan McRaney series which began with his release from prison in the book Stalking Aidan.

To give you a little taster of what is in store if you read this book, the author has allowed me to share a little excerpt with you;

The address he had given me was a block of post-war flats, a paint flaked prefab  not  unlike a host of similar prefabs now being razed to the ground in various areas of London.  The City was moving with the times, but Grey Stoke Road appeared to be way behind them.  The flats were reached by a series of  stone steps badly in need of repair.  The kind of habitat where a man on the run might find himself.  A far cry from the charmer and playboy Daryl Harper purported to be.  Some of the windows were boarded up and the doors were battered enough  to appear as if they had been broken in to.  The street was quiet, an absence of birdsong serving as a reminder even our feathered friends had  forsaken the area for somewhere more upmarket.   In the distance a police siren, the rumble of traffic, but not in this seemingly dead and silent world.

Having rung the bell a number of times only to receive no answer, I was about to move away when I had the prescience of mind to try the door.   Naturally expecting the door to be locked, I was surprised to discover  it was open.  For someone as scared as Daryl appeared to be, I thought it strange he would leave the door unlocked.  Unless of course as he was expecting me he might have been too scared to answer it.

The place smelled  bad, the first thing I was aware of, though wrinkling my nose and sniffing the air made me realise  the smell was familiar.  I failed to pinpoint exactly what it was, but the odour was something metallic, almost coppery.  It was a sickly kind of scent, the kind that made you want to vomit.  As it was I found myself retching and, pulling a handkerchief from my jacket, held it over my nose while I moved from the hall  into what I figured to be the lounge.  The place was dark and dank. Thin curtains yanked across  the windows let in precious little light.  A sense of must and stale air pervaded the place, as if it had been shut up for a long time.  A collection of  yellowed newspapers on the floor only added to the rank vomit inducing stench.  No one lived here and probably had not lived here in months, or even years.  Angrily calling Daryl's name yielded nothing but silence.

Apart from a dusty and battered table, a couple of broken chairs and an old scratched fridge, there was nothing.  "Come on, you bastard!" I hissed. Dust motes rose into the room as I inched further inside.  "If you're fucking playing tricks on me, Harper, I'll fucking....." My sentence hung suspended, while simultaneously an exclamation of , "fuck, what the hell!" was forced from me when I almost tripped over something that was rolled up in a far corner.   Here the coppery stench was even more overpowering.  The something I had tripped over was a body.  Flinging one of the curtains aside, it ripped in my hands, the dust from the rotten fabric almost making me choke, but allowed enough light to filter into the dingy  room.   The body was that of  a man wearing a brown suit.  The suit was covered in dust.  The man was lying face down, and his hair was wet and sticking up at odd angles, plastered flat with a glutinous substance  that came away red in my hand when I touched his head.   My heart raced and I felt sick to my stomach.  The man was dead but not yet stiff.  Rigor Mortis had not set in for the body was  still warm.

When I rolled him over Daryl Harper's sightless eyes stared up at  me as if with accusation that I had been too late.  Another hole  had flowered up, seeping dried blood just above his left eye.  Under the body was a metal object I recognised as a Walther pistol.. The gun was mine. Now the unmistakeable wailing of sirens sounded remarkably close, almost as if they were outside. More sirens drawing nearer. Car doors banging . The echo of running  feet on stone  steps,  while I was leaning  over a dead man with a gun in my hand.

I have been lucky enough to have a chat with the author too and she has kindly answered a few questions for me to give you a little more insight into the book and author!

1: How long have you been writing, and what was the trigger to put pen to paper?

I suppose I've been writing from about the age of eight.  As soon as I was able to read basically!  I wrote my first short story in an old exercise book…

Aidan McRaney is based on the actor Aidan Turner (Poldark) with Jack Higgins’ protagonist Fallon from 'A prayer For The Dying' thrown in.  Like Fallon and Aidan Turner, Aidan McRaney is Irish.  I also draw on Higgins' Irish stories set against the backdrop of the Troubles.

3: Will there be more books to follow in this series?

Yes!  I am currently working on a fifth Aidan McRaney novel entitled, 'The Duellists Club'. Garbed in the clothing of the period, a group of wealthy business re-enact 18th century duels, which is in reality the cover for an assassination bureau.

As well as working on The Duellists Club, I am actually writing my Memoirs about growing up in the Fifties and Sixties.  So much has happened in my life that my son suggested I should write a book.  The book deals with the taboo of a teenage pregnancy in a small village, sexual abuse in the workplace and from an Uncle. I’ll also talk about my relationships with an armed robber and a Hell's Angel! Plus a thwarted plot to kidnap my baby by a woman who having had so many miscarriages had become unhinged. The working title is; 'You Couldn't Make it up: Memoirs of A Country Girl.'

I'm also working on a Historical Romance set in the 18th. Century called 'Gallows Hill'. About a young man, whose father forfeits his lands to his unscrupulous cousin before dying, becomes a highwayman.

5: How important are reviews to Authors like you and has Social Media helped in this respect?

Reviews are seemingly of vital importance especially to self-published authors.  As a voracious reader over the years I read a book and that was it. I either liked it and kept the book to read again, or if not, I gave the book to a charity shop. These days reviews appear to be the be all and end all for the self-published author.  The problem is trying to get a reader to write a review is akin to extracting the proverbial blood from a stone!  I feel guilty asking them to write a review, because it seems as if I'm hounding them.  I love writing and putting my book out there, but then cue the frustration of marketing and those reviews.  I guess Social Media has helped, certainly with sales.  Sorry to rant but to me writing a review is common courtesy!

Really hope that this has got you intrigued enough about the world of Aiden McRaney - go and buy the books now!! -  and I would like to thank J.M. Shorney, the publishers and Bookollective for allowing me to take part in this fabulous Blog Tour!