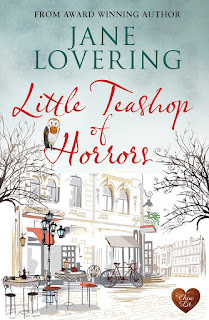 Amy Knowles has always been the plain sidekick to her pretty best friend Jules. And whilst the tearoom they both work in on the Monkpark Hall estate in Yorkshire is not exactly awash with eligible bachelors, it’s obvious where the male attention is concentrated – and it’s not just on the cakes!
There is one man who notices Amy. Joshua Wilson also works at Monkpark, where he flies his birds of prey for visitor entertainment. He lives a lonely existence but he has reasons for choosing isolation – and, in Amy, he may have found somebody who understands.
Then a management change brings slick and well-spoken Edmund Evershott to Monkpark. He’s interested in Amy too, but for what reason? Josh suspects the new manager is up to no good – but will Amy? Because Edmund could leave her with much worse than a broken heart …

Amazon UK - get your copy here!!

Can I highly recommend you take time out of your day today to get yourself a copy of this amazing new tale from the wonderful Jane Lovering!  I promise you a story full of romance, laughs, heartache, cake, drama and an amazing owl called Skrillex! And just look at that cover!!  So inviting!!

This is the story of Amy who works at Monkpark Hall in the cafe with her best friend Julia.  They've grown up together and the historic hall is more than a place of work for them both but with a new owner arriving the panic sets in about whether there will be a place for them anymore.

Amy lives with her grandmother in a cottage nearby, and  her grandmother is a very spirited and forthright woman, who is very set in her ways so when Amy is not at the cafe she is keeping things steady at home.  Except for the spoons!! Are they being touched while nobody is home? Her grandmother is convinced things are being moved.....

When the new boss, Edmund Evershott, arrives he is full of big plans, that never seem to take off and he soon becomes a fan of taking other peoples' ideas of how to make more money and increase visitor numbers and passing them off as his own.  This doesn't go down well with the many loyal staff at the Hall.

One of which is Josh who runs the very successful Birds of Prey display centre at the Hall.  He is very focused on his animals, keeps himself to himself and is seen as 'strange' by many of the other staff.  Amy always finds him friendly and he notices how she is with his precious birds and that immediately makes him feel at ease around her.  But all is not as it seems with Josh and he's obviously hiding something, but what?  But he sees straight through the new boss and his sleazy ways and just hopes that others see that side before it is too late for their beloved Monkpark Hall.

I loved the character of Amy - she's one of the worlds' good guys with a positive attitude, except towards herself as she's always putting herself down,  and always willing to help, but sometimes that leads to you being taken advantage of.  Her friendships are a big part of her life and wanting to do right by her grandmother too.

I absolutely raced through this book as the characters all quickly captured my heart and it was an absolute delight to be transported to the world of Monkpark Hall for an afternoon!
Posted by Books and Me! at Tuesday, March 28, 2017