March in the garden 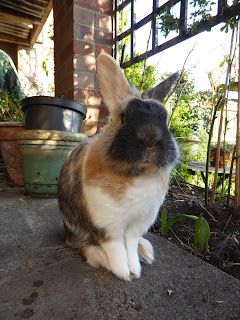 Greetings from myself and the bunny again!  So much going on in the garden at the moment thanks to some spectacularly glorious weather! Even managed to sit out yesterday wearing just a short sleeved top - not the best thing to do when you have freckly skin but the need for natural Vitamin D was just too great to miss out on! 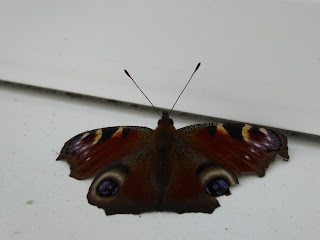 We had a visitor of the butterfly kind over the weekend too!This Peacock butterfly took to soaking up the sunshine on the windowsill, and I have seen a couple more about so far this week so hopefully it will be a good year for butterflies as I have noticed their number dwindling over the past few years. 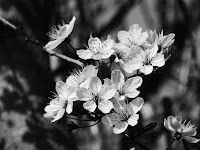 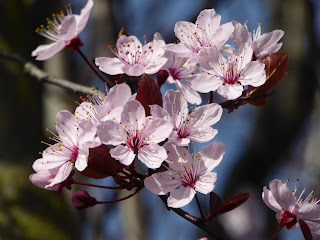 And the blossom has been pretty spectacular too so far this year! No strong winds yet to make it all disappear so it has been nice to enjoy it - in colour and black and white form!! 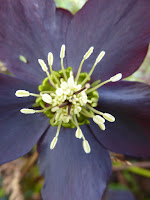 Seems to have been a very good year for Hellebores too this year and we still have a fair number flowering away, and lots of little seedlings nearby so I'll be potting a few of those up to see what colour flowers they produce in a couple of years time! 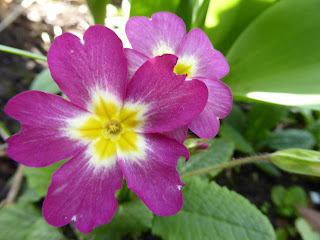 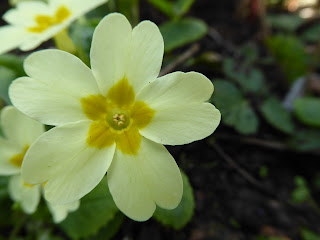 Last year we had a lot of the cream native primroses so it has been nice to see a splash of pink amongst them this year! 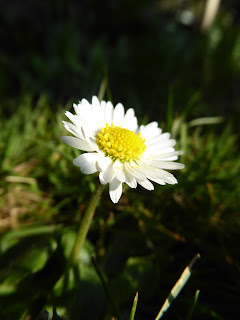 Daisies... so are you a fan or do you despise them?! I have to admit to loving them and even mowed round the little clumps we have yesterday so that they could carry on flowering!  That's not strange behaviour is it??!! 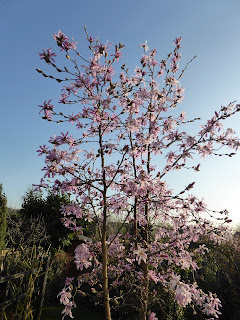 My Magnolia tree is also full of flower at the moment and a real statement piece - considering it was a free 'twig' from a magazine a few years ago it really has settled in well, although is probably in the wrong place as I wasn't  picturing it ever getting this big when I first planted it! Too late to move it now so think it may need some creative pruning!! 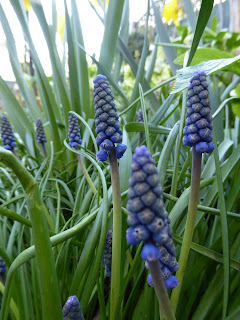 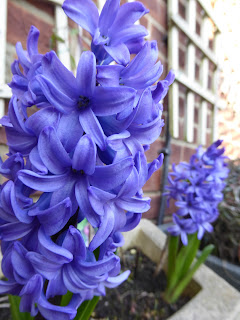 Always a fan of blue flowers in the garden so the grape hyacinths have begun to run amok amongst the borders yet again! Despite clearing out handfulls at the end of every year they seem to return! At least it stops the weeds getting through I guess!  Hyacinths are also having a good year and are making the garden smell heavenly! 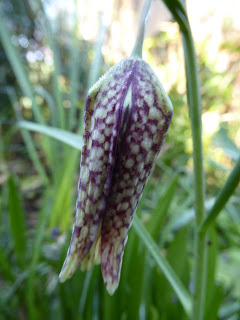 This was a surprise visitor in the little grassy wild area we have round our pond - currently full of frogspawn! - I remember planting a few fritillarias a few years ago and thought the lily beetles had decimated them all! I am happy to be proved wrong and hope they get to build up a little and spread as they are such a pretty flower!

The seed sowing has also begun and going well with sweet peas and tomatoes leading the way!  Have just ordered a new mini wooden greenhouse - unfortunately I haven't found the room in the garden for a full size greenhouse! - so hoping to build that up over the next few days and get a few more trays of seedlings moved in!

Still fighting a losing battle against neighbourhood cats using our garden as a hang-out/toilet and wasn't best pleased to see them using the new wooden bird table as a scratching post the other week - ggrrrrr!!  And I've now had to put up extra barriers around the pond as one cat was pulling out frogspawn the other day.  I've found a few short sticks (pointy!!) planted around the pond has deterred them a little, but found the Pepper dust that is supposed to put them off has failed miserably so back to the drawing board!!