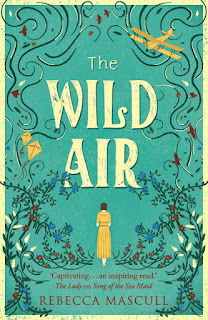 Extremely delighted to be part of this wonderful  Blog Tour today and to share my thoughts, as well as an excerpt to give you a little taster of what is in store for you if - that should be when! - you get hold of this book.  Trust me!! You need this book on your shelves!

In Edwardian England, aeroplanes are a new, magical invention, while female pilots are rare indeed.When shy Della Dobbs meets her mother's aunt, her life changes forever. Great Auntie Betty has come home from Kitty Hawk, North Carolina, across whose windswept dunes the Wright Brothers tested their historic flying machines. Della develops a burning ambition to fly and Betty is determined to help her.But the Great War is coming and it threatens to destroy everything - and everyone - Della loves.Uplifting and page-turning, THE WILD AIR is a story about love, loss and following your dreams against all odds.

Rebecca has kindly allowed me to share an excerpt from the book so without further ado...

‘I’m not going to die here,’ she said.
Della talked aloud to herself. She did that when it was marvellous and she revelled in the complete wonder of flying, the secret joy of it. Or when it was bad. When the mist came down or the wind got up something terrible and she was fighting the weather in order to come back alive. There’d been patches of thick fog over the Channel that morning, a scrap here and there of blue-sky clarity but otherwise a freezing soup of white. The effort to stay straight and sane in that blindness was gruelling.

It was bitterly cold up there. Despite the woolly scarf covering her mouth, she could still taste the smoke. Sprits of black oil were flung back at her, not much but constant, insidious, landing inky on her goggles. But she mustn’t try to wipe it yet; the oil would just smear and then she wouldn’t be able to see a thing; she’d have to lift them and expose her eyes to the smut and the filth. The airflow from the propeller alone assailed her at a hundred miles per hour or more. The wind was the air turned angry. It swatted and swiped at her.

The engine was roaring, the rushing wind deafening. When she spoke to calm herself she couldn’t hear the words, but just mouthing them gave comfort. She could hear them in her mind. They were the only things there. Her head was empty when she flew, as empty as the sky above. It was your body that did the flying. You have to feel it in every muscle, be a part of it, become it.

She spoke again: ‘I’ve got the touch.’

They always said that about her, She’s got the touch. She can feel yaw in her bones, knows where the air is coming from and how it’ll lift or drop. She can step into an aeroplane and strap it on and fly. It’s a kind of magic trick. After all, it’s simply deflecting air. It’s preposterous. Only a fool would do it, some said. There’s no road to steer on like an automobile, no brake to apply, no side track to save you. It’s freedom and it’s fear, all at once.

‘Not far now,’ she told herself, as if comforting a child. ‘The sea’s behind us.’

The land scrolled beneath like a toy farm, glowing squares of light here and there marking life and habitation, hearth and home. It would be peaceful if it weren’t for the clamour of the wind and the engine. But then, she smelt fuel. Stronger, keener. Then sputtering, then the engine stopped. Failed utterly. The horror of it froze her. Within a second, the aeroplane was pitching forwards, its power gone. Her hands gripped the stick. Terror took hold and the animal part of her mind longed for the ground to come, for the impact and the destruction, for it all to be over. The exertion necessary to fly, to concentrate, to save yourself, was exhausting. At least death would mean rest.

‘Must keep the nose down. Must land,’ she said, her voice high and shrill, shocking her out of her stupefaction, and she grasped the stick and eased her feet on the rudder bar to bank into position for landing. Seeing a field to the right, with its flat acres of mud beckoning to her, she pitched the nose down and hoped to heaven the undercarriage wouldn’t smash into that line of poplars edging the field. As she struggled to maintain control, her machine pitched forwards, the ground hurling itself at her face, and the thought leapt into her mind that she had failed him, by crashing, by abandoning him to his fate, by dying.

It is always a reading delight to find a book that both entertains, enthralls and informs, and Rebecca Mascull has done it again with this story that features a young girl who has a passion for flight. Not so usual for a young girl in the Edwardian period but along the way she finds plenty of inspiration and never gives up on her dream.Della Dobbs is at the heart of this story and is such an quiet, unassuming young child that as a reader you are immediately drawn to her in the hope that she finds her way and is set free from the constraints of her home life which are very much controlled by her father who is very strict, set in his ways and extremely boorish. Della finds her escape by riding her bike and learning to fix it - all very unladylike!Her Aunt Betty is soon a visitor to the UK from America, and Della seems in awe immediately by this woman who isn't afraid of her brother in law and has seemingly lived such an exciting life. Betty takes Della under her wing and gives her a new found confidence through flying and building kites and soon talks of the planes she saw in flight in America - Della is smitten! Della has so many insecurities as a child thanks to her home life that it is amazing the effect that some attention from another family member has on her and allows her to flourish and find her feet.The relentless determination and passion Della shows to become a female pilot is extremely inspiring and nothing is ever going to stop her - she does encounter a number of knockbacks and hurdles but they only seem to spur her on to achieve greater things.Her career as an Aviatrix is soon halted due to the First World War and this added another dimension to the story - the fact that less qualified pilots were allowed to fly as they were male, and women such as Della were grounded through that time. At the end of the book the author has also included notes about her research and some amazing women she encountered along the way and it is fascinating to read of these inspiring women who we know very little of. And how the fear of women pilots is still being played out today in the modern world.This is a wonderful blend of historical fiction and romance, as we follow Della from childhood to first loves and all her accomplishments, and such an inspiring read which has been so well researched and beautifully written that you are totally swept up in her world and I couldn't put this book down until I had finished it!! Highly Recommended!!

It has been such a delight to be part of the Blog Tour today!  Please head over to www.alwaysreading.net tomorrow for more and check out the Blog Tour poster below for where else to stop by! 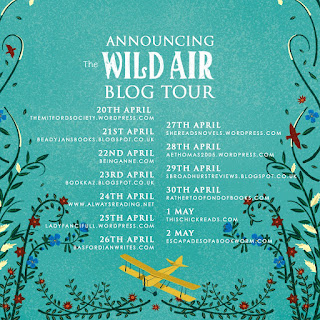 Other books by Rebecca Mascull 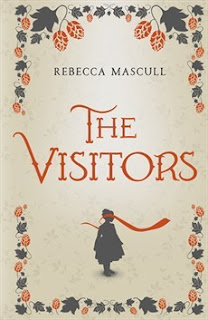 Song of the Sea Maid 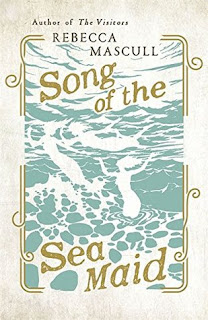