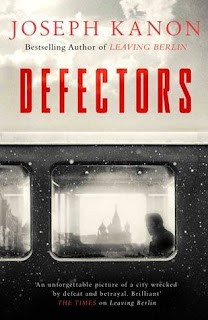 From the bestselling author of Leaving Berlin and The Good German comes a thrilling and richly imagined novel focused on three weeks in the lives of a select group of defected American spies in Moscow during the height of the Cold War.

Moscow, 1961. Stalin has been dead for eight years. With the launch of Sputnik, the Soviet Union’s international prestige is at an all-time high. Former CIA agent Frank Weeks, the most notorious of the defectors to the Soviet Union, is about to publish his memoirs, and what he reveals will send shockwaves through the West.

Weeks’s defection in the early 50s shook Washington to its core—he had been a beloved member of the OSS and then the CIA, one of the bright young men who’d come out of the war ready to take an early lead in the new American century. His betrayal rippled throughout the State Department, prompting frantic searches for moles and forcing the resignation of Simon, Frank’s former college roommate and best friend.
Now, a Soviet agency approaches Simon, a publisher in New York City, with a controversial proposition to publish the memoirs of his old friend, Frank Weeks. Simon knows that there’s no way the US government will approve the publication of a book clearly intended as propaganda for the KGB…yet he finds the offer irresistible.
Set against the paranoiac atmosphere of the Cold War, Defectors is a smart and authentic exploration of espionage and betrayal, perfect for fans of John le Carre, “Alan Furst, Philip Kerr, and other masters of wartime and postwar espionage fiction” (Library Journal, starred review).
Published - 1st June 2017
Author Website
Amazon UK
Hive.co.uk - buy online and support your local bookstore

I found this to be a fascinating and thought provoking Spy thriller - not a normal genre that I read but will definitely read more of now!

It is the story of 2 American brothers' - Frank and Simon Weeks - and how Frank defected to the Soviet Union in the early 1960's. This caused huge shock and outrage at the time back home and his brother was left wondering why.  Fast Forward 12 years, and now Frank is looking to release his memoirs of the events of the time and his brother is in publishing and has been offered the deal to publish the book.  He is intrigued after not seeing his brother for many years and wants to know more so travels to Moscow to meet up with his brother and find out just why now is seen as the time that he wants to share his thoughts.

Frank has been very well looked after in the Soviet Union, especially when he and his wife Jo, lost their son to meningitis and it is absorbing to see things from his perspective and that he thought he was doing the right thing, and how he sees his family and their future panning out.

There is a lot of conversation in this book which did get a little tedious at times, but does offer a great insight into the various aspects of life as a spy, the double dealing, the politics and the betrayal and is definitely worth investing time in taking it all in.

This book is definitely a slow burner and a more intelligent read than some offerings but there's enough intrigue and an engaging look at the brothers relationship now and then to hook you in and keep you engaged throughout.

Thank you to Emma Finnigan PR for my ARC copy in return for a fair and honest review.