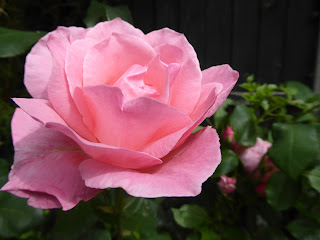 Howdy!!  I trust we are all doing well and surviving all that life throws our way?!  I'm currently in charge of a hamster that my niece has trusted me to look after while she is away for a few days!  I remember having a hamster or 2 when I was younger - they make pretty rubbish pets don't they?!!  Hopefully Humphrey the hamster will enjoy his stay with me for the next few days, and will decide not to go missing on one of his jaunts round the house in his hamster ball!!

On to the books!!  I thought it was a pretty slow reading week until I looked at my reading notebook and it turns out that I managed to get back to finishing 5 books! It does help when you have a productive afternoon in the garden one day - yay sunshine! - and manage to finish 2 e-books in one sitting!

And as for the bookhaul - eek!! There has been quite a few this week!  The Urbane Book Club Haul that I shared the other day deserved a post of its' own, so I won't go over those again! Otherwise I'd have you here for hours!!

On with the wrap up!!

The Summer of Second Chances by Maddie Please  -  4 stars

A Pocketful of Crows by Joanne M Harris  -  5 stars

The Somnambulist by Essie Fox  -   3 stars

Impossible Views of the World by Lucy Ives  -  2 stars

Along with my Urbane Book Club parcel containing 8 books, and the wonderful Moth Box which added 2 more books to the overcrowded shelves, I still managed to add a couple more - 2 I treated myself to, 1 was from the fabulous Readers First site! 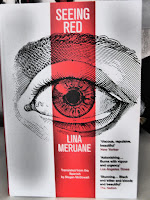 This powerful, profound autobiographical novel describes a young Chilean writer recently relocated to New York for doctoral work who suffers a stroke, leaving her blind and increasingly dependent on those closest to her. Fiction and autobiography intertwine in an intense, visceral, and caustic novel about the relation between the body, illness, science, and human relationships. 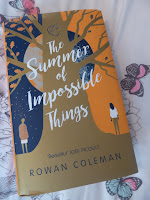 The Summer of Impossible Things by Rowan Coleman

If you could change the past, would you?Thirty years ago, something terrible happened to Luna’s mother. Something she’s only prepared to reveal after her death. Now Luna and her sister have a chance to go back to their mother’s birthplace and settle her affairs. But in Brooklyn they find more questions than answers, until something impossible – magical – happens to Luna, and she meets her mother as a young woman back in the summer of 1977. At first Luna’s thinks she’s going crazy, but if she can truly travel back in time, she can change things. But in doing anything – everything – to save her mother’s life, will she have to sacrifice her own? 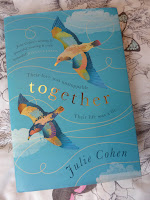 Together by Julie Cohen

This is not a great love story. This is a story about great love.On a morning that seems just like any other, Robbie wakes in his bed, his wife Emily asleep beside him, as always. He rises and dresses, makes his coffee, feeds his dogs, just as he usually does. But then he leaves Emily a letter and does something that will break her heart. As the years go back all the way to 1962, Robbie's actions become clearer as we discover the story of a couple with a terrible secret - one they will do absolutely anything to protect.Perfect for fans of Jojo Moyes's Me Before You, David Nicholls's One Day and M L Stedman's The Light Between Oceans.

An Unlikely Agent by Jane Menczer

London, 1905. Margaret Trant lives with her ailing, irascible mother in a dreary boarding house in St John’s Wood. The pair have fallen on hard times, with only Margaret’s meagre salary from a ramshackle import-export company keeping them afloat.When a stranger on the tram hands her a newspaper open at the recruitment page, Margaret spots an advertisement that promises to ‘open new horizons beyond your wildest dreams!’. After a gruelling interview, she finds herself in a new position as a secretary in a dingy backstreet shop. But all is not as it seems; she is in fact working for a highly secret branch of the intelligence service, Bureau 8, whose mission is to track down and neutralise a ruthless band of anarchists known as the Scorpions.Margaret’s voracious reading of detective fiction has scarcely prepared her for the reality of true criminality. Her journey of self-discovery forms the heart of this remarkable novel, as she discovers in herself resourcefulness, courage, independence and the first stirrings of love.Menczer conveys the fog and grime of Edwardian London in an espionage thriller that evokes the humdrum dinginess of spywork as it alternates with thrilling danger, in a manner characteristic of John le Carré. Margaret Trant is a heroine to remember

Satin Island by Tom McCarthy  - listening to the audio book

MEET U. – CORPORATE ANTHROPOLOGIST secreted in the basement of a large consultancy. U. spends his time toiling away at a great, epoch-defining public project which no one, least of all its own creators, understands. Besieged by data, confronted at every turn by the fact of his own redundancy, U. grows obsessed with the images – oil-spills, roller-bladers heading nowhere over streets that revolutionaries once tore up, zombies on parade – which the world and all its veil-like screens bombard him with on a daily basis. Is there a plot at work behind the veil? Is it buffering a portal to the technological divine? Who killed the parachutist in the news? And what’s this got to do with South Pacific Cargo Cults? U.’s disconnected notes from underground in fact amount to an impassioned, integrated vision – of disintegration. Satin Island is a book that captures our out-of-joint times like no other.

And there we have it! Another week all wrapped up! Doesn't time fly when you're reading and having fun?!!  Hope your week has been as good!