His Frozen Fingertips by Charlotte Bowyer - Blog Tour and review 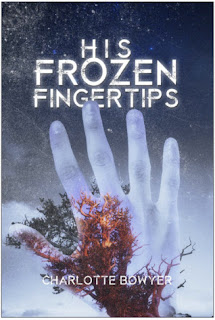 When he is diagnosed with a life-threatening heart condition at the age of seventeen, Asa is certain that his adventures have come to an end. He is alone, having been abandoned by parents who never wanted him and a village that couldn’t raise him. However, as the bells start to ring, those are the least of his problems. The evil sorcerer Erebus has the land of Eodem under his control. Thrust into a world of distrust and aggression, Asa can rely on just one person: his friend Averett. The wall that divides Eodem seems to be an unobtainable goal, and danger is always one step ahead.

I found this to be a really enjoyable YA adventure that follows Asa and Avery as they are sent on a quest to stop the evil sorcerer Erebus.

Asa is not your normal 'hero' as he has just received devastating news about his health. With no family to support him - his parents dumped him 5 years ago - his only true friend is Avery who has the knack of turning up just at the right time and who won't listen to Asa when he tries to push him away.  When Asa is then chosen to be the one to try and save the village again from its' annual attack he is eager to accept the challenge! He wants adventure and he has nothing to lose but everything to gain!

It is a great story of a friendship between the 2 that is so strong and shows the lengths that people will go to for friendship and love.    They meet some very interesting people along the way on their journey and not all are on their side.  They also come across travellers who haven't made it to their destination and that brings home the reality of their challenge and makes them refocus.  There is

This was a really easy read that I finished in an afternoon, and had plenty to keep me turning the pages and I can see it being lots of fun for a YA reader looking for a good adventure and something a little different!