Larry and the Dog People by J.Paul Henderson - book review 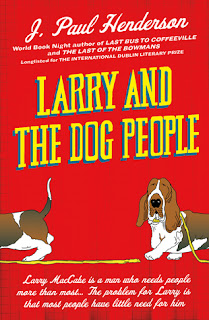 Larry MacCabe is a retired academic, a widower, and friendless—until a chance meeting with the administrator of a care home. At her suggestion he adopts a basset hound, and joins her one Saturday at Georgetown’s Volta Park. He becomes a regular visitor, and for the first time in his life the member of a gang. While his new companions prepare for the annual Blessing of the Animals service on the Feast Day of St. Francis, Larry puts the finishing touches to a conference paper he’s due to present in Jerusalem and arranges a house-sitter. Neither the service nor his visit to Israel go to plan, and on his return Larry is charged with conspiring to blow up a church and complicity in the deaths of four people. All that stands between him and conviction is a personal injury lawyer—and things for Larry aren’t looking good.

J PAUL HENDERSON was born and grew up in Bradford, West Yorkshire, gained a Master's degree in American Studies and travelled to Afghanistan. He worked in a foundry, as a bus conductor, trained as an accountant and then, when the opportunity to return to academia arose, left for Mississippi, returning four years later with a doctorate in 20thC US History and more knowledge of Darlington Hoopes than was arguably necessary. (Hoopes was a Pennsylvanian socialist and the last presidential candidate of the American Socialist Party). American History departments were either closing or contracting, so he opted for a career in publishing, most of which was spent selling textbooks, in one position or other, for John Wiley & Sons. He lives in a house in England, drives a car and owns a television set. And that's about it.

How does a socially awkward, lonely widower end up in jail charged with conspiracy to blow up a church and the killing of 4 people?!  I've had the pleasure of finding out whilst reading this book, and it has been one of those books that has been a delight to discover!

I was intrigued by the blurb and the publishers, No Exit Press, kindly sent me an ARC as it sounded right up my street! And it was!

With touches of 'A Man Called Ove' we are introduced to the character of Larry who is desperately alone since the passing of his beloved wife.    He has always been socially awkward and this has become more noticeable since he's been on his own.  He is a retired Professor and has the ability to remember the mundane facts of the world, and seems to think others would be as interested in things as he is - they often aren't!    He becomes one of the 'magnolia' people, instantly forgettable and he finds that often nice doesn't seem to get you anywhere in life and in finding friends. Even his children have nothing to do with him!

He was a geek as a child and nobody ever told him he talked too much, so he carried on!  And as a teacher for 37 years he could talk as much as he liked!

His home is silent since losing his wife, so he goes looking for company and conversation.  He tries volunteering and this leads him down the path of dog ownership!  Unfortunately his first attempt doesn't go too well, but soon Moses appears in his life and his new life is just about to begin!

He soon starts meeting a mixed bag of characters at the local dog park - 'the dog people' - and these are all weird and wonderful people who would never normally have met under any circumstances but soon form a bond over the time they spend together with their dogs.  I loved the mix of people, and you get to see the stories behind many of these characters and there are some fascinating stories to be told!

His work as a Professor is never far from his mind, and this leads to an opportunity to deliver a talk in Israel, seeing as he's the leading expert on the 'Desert Land Act of 1877'. (Yes, I've looked it up since to find out more!!)  Who knew this new venture would lead to his life unravelling again!

I found this book to be such a fascinating, funny and dark read!  It's a story of grief, being alone, moving on and acceptance.  And just when you think you have figured out the moral behind the story, then 'boom' it all takes a much darker twist and leads you down a completely different thought process!  Maybe you are better off alone....

Highly recommended if you are looking for something a little different! I will definitely be reading more from this author!

My thanks again to No Exit Press for the ARC copy
Posted by Books and Me! at Thursday, July 27, 2017