The Little Cottage in the Country by Lottie Phillips - Book Review 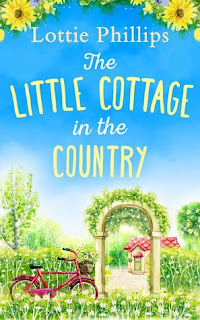 Escape to the country!

Anna Compton thought that moving to the countryside, leaving London and her past firmly behind her was the perfect solution. Goodbye life of thirty-something, crazed single mum of two, hello country glamour queen, domestic goddess and yummy-mummy extraordinaire.
But her new life at Primrose Cottage isn’t quite what she expected! Very soon she’s chasing pork pies down hills, disguising her shop-bought cakes at the school bake sale – and trying to resist oh-so-handsome Horatio Spencerville, who just so happens to be the Lord of the Manor…
Could moving to the country be the biggest mistake she’s ever made?
A delightfully uplifting romantic comedy to get you in the mood for summer! Perfect for fans of Christie Barlow, Holly Martin and Tilly Tennant.

This was a fabulously funny read - with a seriously pretty front cover!! -  and I thoroughly enjoyed following the exploits of Anna and her children as they move out of London and into a cottage in the middle of nowhere left to her by her favourite Aunt.

Along the way her best friend Diane and Anna's mum join them in their resettled life and all their lives end up changing in ways they never even thought! Her editor in London gives her the assignment of documenting their move to the country for the paper in a diary style piece, and her new life gives her plenty to talk about!

The characters she encounters from the village and school add to the hilarious fun - there are competitive mummies, hunky local farmers, the Lord of the manor - with the wonderful name of Horatio! - and some of her exploits had me laughing out loud!

As always, life doesn't run smoothly and she is also left a diary by her Aunt containing local secrets and this added a nice twist to the story, although I would have loved more of the entries from the diary of the Aunt, along with the Diary pieces she was writing for the paper as this side of her life did feel a little abandoned once it was mentioned in the book.

Anna also has an ex to deal with who finds out about her new life - when he wanted nothing to do with her when she became pregnant - and this book is great at showing how Anna takes to facing new challenges... however mad they are!! She is quite a headstrong character and often writes her own narrative which means she is very quick to judge without listening, and this does lead to some awkward situations!

Highly recommended as the perfect summer read and I guarantee it will have you chuckling in no time!!
Posted by Books and Me! at Thursday, July 06, 2017