Love and Other Consolation Prizes by Jamie Ford #bookreview 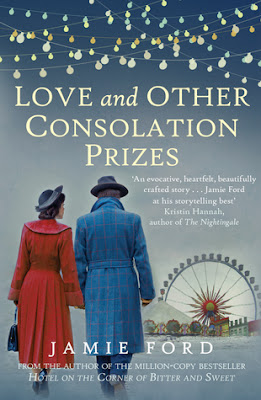 1909, Seattle. At the World's Fair a half-Chinese boy called Ernest Young is raffled off as a prize. He ends up working as a servant in a brothel in Seattle's famed Red Light District and falls in love with Maisie, the daughter of a flamboyant madam, and Fahn, a karayuki-san, a Japanese maid sold into servitude.
On the eve of the new World's Fair in 1962, Ernest looks back on the past, the memories he made with his beloved wife while his daughter, a reporter, begins to unravel their tragic past.
Publication Date - 12th September 2017
Publishers Allison & Busby
Amazon UK  - £14.99 hardback
Hive.co.uk - buy online and support your local bookstore  -  £10.95 hardback
Book Depository  -  £12.24 hardback

MY REVIEW
Time to admit that I have the previous work from the author - Hotel on the Corner of Bitter and Sweet, and Songs of Willow Frost - sat on my bookshelves waiting for me to dive into!  And that time has never come around for whatever reason. But after just finishing this wonderful tale, I WILL be getting to the other books sooner rather than later as I really enjoyed the way the author told this story and can't wait to read more from him!

This follows the story of a little boy who has a tragic start to his life in China, and who ends up in America for a new start.  That new start ends up as being the raffle prize in the 1909 World's Fair! To him any new life was going to be an amazing opportunity, but where he ends up he gets the family he craves and the owner of the Tenderloin gives him an education he life he never could have expected!

The story runs over 2 timelines - back in 1909 when he is finding his way in the world, to 1962 where he is struggling to cope with the memory loss and illness that has affected his beloved wife Gracie.  It is clear that he is completely devoted to her and will do all he can to protect her past - even her own daughters know nothing of it.  But as Gracie's memories from the past become more clearer it is obvious he can't hide the past for too long.
Throughout the story it is clear that Ernest yearns for the safety of family, which is why he blossomed during his time at the Tenderloin where he felt part of the family, and why in his later years he was so devoted to his wife and worried what his daughters would think if they found out about their past.

I loved the setting of this book and the characters were all amazingly portrayed - especially Ernest as we watch him grow up in such a different world from where he came.  He's had so much to overcome but always rolls his sleeves up and gets on with things.  It is an absorbing and captivating story over both timelines, full of heartbreaking moments and shows of strength of character.

It really opened my eyes to the struggles that women faced in 1909 in America where you had the emergence of the Suffragete movement, alongside the 'slave trade' that many were still being forced into and shows off different sides to a city and how women had such different lives.

A fascinating book that made it difficult to put down and shows off storytelling at its' best!  Highly recommended!!

Thankyou to the publishers for the advanced copy in return for a fair and honest review.