Watch for me by Moonlight by Kirsty Ferry #bookreview 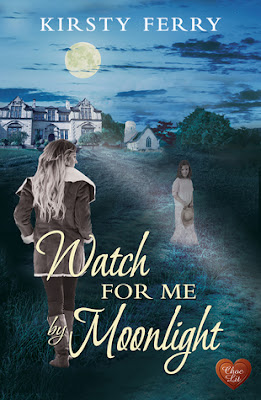 “It was the first full moon since that night. She waited and watched by moonlight, as she had promised …”When her life in London falls apart, Elodie Bright returns to Suffolk and to Hartsford Hall, the home of her childhood friend Alexander Aldrich, now the Earl of Hartsford. There, she throws herself into helping Alex bring a new lease of life to the old house and its grounds.After a freak storm damages the Hall chapel and destroys the tomb of Georgiana Kerridge, one of Alex’s eighteenth-century relatives, Elodie and Alex find a connection in the shocking discovery brought to light by the damaged tomb.Through a series of strange flashbacks and uncanny incidents, they begin to piece together Georgiana’s secret past involving a highwayman, a sister’s betrayal and a forbidden love so strong that it echoes through the ages …

This is another fabulous supernatural read from Kirsty Ferry that I adored from start to finish!Elodie is returning to her past, a long way from her current high flying position in London, but it doesn't take her long to settle back into life in Hartsford. She teams up with her friend Alex who is in the process of trying to revitalise his childhood home, Hartsford Hall, into a tourist destination and bring life back to the old house and gardens, and raise some much needed funds!After a storm devastates the local church, Elodie and Alex find the tomb of his ancestor, Georgina Kerridge, in ruins but that is not all they find, and the past soon becomes to materialise and we get the fascinating flashbacks to Georgianas' life through Elodie and her secrets are brought to life in amazing detail.I really enjoyed this novel! The set up and story line were fascinating and all the characters were extremely likable so you had instant empathy with their experiences. Great mix of the historical and romance genres - the perfect blend and not too OTT on the romance front which just felt natural. I thought it was beautifully written and captured the emotions so well. Really intriguing to delve into the past this way, through touching items and how history seemed to be repeating itself.A captivating read!!  Thank you to the author and publishers for the advanced reading copy in return for a fair and honest review!
Posted by Books and Me! at Monday, October 09, 2017