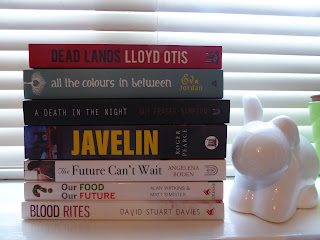 My favourite time of the month has arrived!! I knew it was going to be fun when I signed up to the Urbane Publications Book Club at the start of the year! For the princely sum of £99.99 you  receive a copy of EVERY book they publishe throughout the year!  My bookshelves are now creaking under the weight of all the fabulous releases that they've sent out this year, and this is the October and November releases which contain a little bit of everything! So I thought I'd share this as a separate book haul and let you read a little bit about each book - to see if any tempt you! I'm struggling to decide which one to start with, although I have already read Dead Lands and loved that so can highly recommend that one if you're looking for a new read!!

Dead Lands is a thrilling crime story set in the 1970s. When a woman's body is found a special team is called in to investigate and prime suspect Alex Troy is arrested for the murder. Desperate to remain a free man, Troy protests his innocence, but refuses to use his alibi. Trying to protect the woman he loves becomes a dangerous game - questions are asked and suspicions deepen. When the prime suspect completes a daring escape from custody, DI Breck and DS Kearns begin the hunt. Breck wants out of the force while Kearns has her own agenda and seeks revenge. Breck has his suspicions and she wants to keep it from him, and a right-wing march provides an explosive backdrop to their hunt for Troy. Lloyd Otis brings a startling account of the past back to life over a burgeoning '70s landscape, and delivers a thrilling piece of crime fiction that will excite any fan of the genre

ALL THE COLOURS IN BETWEEN by EVA JORDAN

Eva Jordan's much-anticipated follow up to the bestselling 183 Times a Year It's not a life, it's an adventure! Lizzie is fast approaching 50. Her once angst ridden teenage daughters, now grown and in their twenties, have flown the nest, Cassie to London and Maisy to Australia. And, although Connor, Lizzie’s sulky, surly teenage son,is now on his own tormented passage to adulthood, his quest to get there, for the most part, is a far quieter journey than that of his sisters. The hard years, Lizzie believes, are behind her. Embracing her new career as a writer; divorce, money worries and the constant battle to weather the stormy complexities of the blended family, are all but a distant memory. It’s time for Lizzie to focus on herself for a change. Stepdaughter Maisy is embracing life down under and daughter Cassie is working for a famous record producer in London. Lizzie’s only concern, albeit a mild one, is for the arrested development of her Facebook-Tweeting, Snapchatting, music and mobile phone obsessed, teenage son. With communication skills, more akin to an intermittent series of unintelligible grunts, conversation is futile. However, Lizzie is not particularly perturbed. With deadlines to meet and book tours to attend, Lizzie has other distractions to concentrate on. But all in all, life is good. Life is very good.Only, things are never quite as black and white as they seem…A visit to her daughter in London leaves Lizzie troubled. Cassie is still the same incessant chattering Queen of malaprops and spoonerisms she ever was, however something is clouding her normally cheery disposition. Not to mention her extreme weight loss. And that is just the start. Add to that an unexpected visitor, a disturbing phone call, a son acting suspiciously, a run in with her ex husband and a new man in her life who quite simply takes her breath away; Lizzie quickly realises life is something that happens while plans are being made.Harsh but tender, thought provoking but light-hearted, dark but brilliantly funny, this is a story of contemporary family life in all its 21st century glory. A story of mothers and sons, of fathers and daughters, of brothers and sisters, and friends. A tale of love and loss, of friendships and betrayals and a tale of coming of age and end of life. Nobody said it would be easy and as Lizzie knows only too well, life is never straightforward when you see all the colours in between.

A DEATH IN THE NIGHT by GUY FRASER-SAMPSON

Book 4 in the thrilling Hampstead Murders series!When a woman identified as the wife of a prominent lawyer dies at an exclusive women's club, the team from Hampstead police station find themselves thrown into a baffling investigation with very little evidence to offer any guidance.By coincidence, Metcalfe, Collins and Willis were all attending a vintage dinner dance at the club at the estimated time of death. Can they remember anything between them which might indicate a solution?Set against a background of professors, barristers, and serial adultery, the fourth in the Hampstead Murders series continues the pattern set by its predecessors: strong, character-driven contemporary narrative written in the spirit of the Golden Age of detective writing. Praised by leading crime-writers, and garnering rave reviews from book bloggers, the books have been described as elegant, intelligent, quirky and 'a love letter to the detective novel'. All agree they are very 'different' from the standard fare of modern crime fiction.

A gripping political thriller set over two weeks in the aftermath of Brexit, Javelin will not disappoint fans of Detective Chief Inspector John Kerr. Two explosions in Victoria mark the beginning of a bombing campaign against banking institutions in London. The attacks bear the hallmarks of Irish republican dissidents but are disowned by IRA volunteers and politicians in Belfast. Kerr believes the bombs are the work of the extremist group Anti-Capitalist Insurrection, with attacks in London the first stage of a devastatingly deadly campaign across Europe...can Kerr stop them in time?

Kendra Blackmore always believed she was a good mother, doing her best for her children. And she thought they were happy in life. But when her half-Iranian daughter Ariana (Rani) undergoes an identity crisis which results in her cutting of all contact with her family, Kendra begins to question everything. Has her daughter become radicalised by Islamic State? Her son Adam, a doctor, explains it’s a normal part of development and that it won't last, but sick with worry Kendra is desperate to understand why her home loving daughter would do this. To the point that it pushes her to the edge of irrationality and denial. Where is Rani? Why would she forsake her family? Kendra is fighting not just to win back her daughter, but to save everything she holds dear.

OUR FOOD, OUR FUTURE by ALAN WATKINS & MATT SIMISTER

'A brilliant book. It explores the complexities of the global food system and how we can fix the challenges. If you care about access to quality, affordable food then read this book' - Heston Blumenthal The third book in the critically acclaimed Wicked & Wise series offers a compelling analysis of the issue of food on an international scale. From nutrition to world hunger to GM farming, what are the impacts of food and food issues on regional, political, cultural, business and social priorities? With 2 billion obese and 2 billion hungry, food is a key issue in the future development of the world's population and its health. As with every wicked and wise issue, it throws up significant moral, political and economic concerns when tackling how we will keep the world's population nourished in decades to come.

Blood Rites is the latest gripping DI Paul Snow thriller from renowned crime writer David Stiart Davies. 1980s Yorkshire. DI Paul Snow has a personal demon. He is a homosexual but is desperate to keep it secret, knowing it would finish his career in the intolerant police force. As this personal drama unfolds, he is involved in investigating a series of violent murders in the town. All the victims appear to be chosen at random and appear to have no connection with each other. After the fourth murder, he is removed from the case for not finding the killer but continues investigating the matter privately. Gradually, Paul manages to determine a link between the murder victims, but this places his own life in great danger. Can Paul unmask the killer as he wrestles with his own demons?

Not a bad little haul eh!!  Some rather intriguing titles there for me to enjoy over the winter months!!  Now to find space on my bookshelves for them all!!