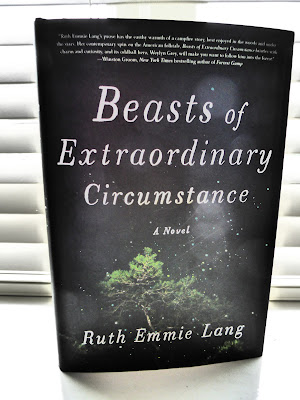 THE BLURB
"Exquisite and adventurous" -- Bustle, "11 New Fiction Books You Need"Orphaned, raised by wolves, and the proud owner of a horned pig named Merlin, Weylyn Grey knew he wasn’t like other people. But when he single-handedly stopped that tornado on a stormy Christmas day in Oklahoma, he realized just how different he actually was.That tornado was the first of many strange events that seem to follow Weylyn from town to town, although he doesn’t like to take credit. As amazing as these powers may appear, they tend to manifest themselves at inopportune times and places. From freak storms to trees that appear to grow over night, Weylyn’s unique abilities are a curiosity at best and at worst, a danger to himself and the woman he loves. But Mary doesn’t care. Since Weylyn saved her from an angry wolf on her eleventh birthday, she’s known that a relationship with him isn’t without its risks, but as anyone who’s met Weylyn will tell you, once he wanders into your life, you’ll wish he’d never leave.Beasts of Extraordinary Circumstance tells the story of Weylyn Grey’s life from the perspectives of the people who knew him, loved him, and even a few who thought he was just plain weird. Although he doesn’t stay in any of their lives for long, he leaves each of them with a story to tell. Stories about a boy who lives with wolves, great storms that evaporate into thin air, fireflies that make phosphorescent honey, and a house filled with spider webs and the strange man who inhabits it.There is one story, however, that Weylyn wishes he could change: his own. But first he has to muster enough courage to knock on Mary’s front door.In this warm debut novel, Ruth Emmie Lang teaches us about adventure and love in a beautifully written story full of nature and wonder.

Just a few words I noted down as I read this book! It's fair to say I adored every single page of this book!!  This is a book that was brought to my attention by the BookTuber Simon Savidge, and I'm so glad I saw him rave about it as it's one of the most wonderful books I've ever read!

It's the story of Weylyn Grey.  Raised by wolves from the age of 4 he has always spent his life on the outside, not fitting with the norm.  But this book shows us how his life impacts on people who come into contact with him, and how it changes them and him!  Plus there's a magical pet pig called Merlin - what  more could you want?!!

As I knew very little of what to expect from this book when I started it, I think this made it even more of a magical read and the way the story was told was also really clever and allowed you to see the story from different views of the people he came into contact with and over so many years.  The character Weylyn is such an extraordinary being, that it is difficult not to fall in love with him almost immediately, and the way he touches the life of others just by being himself is enchanting.

It's a story about belonging, trusting, believing, hope ..... I frigging love this book!!!