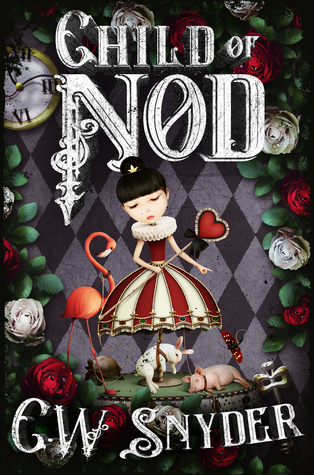 Alice wakes one day to find herself on the other side of death, in the corrupted fairy tale land of Nod. Unable to remember much of the events leading to her demise, she sets out on a journey to discover her memory and the reason for her presence in Nod. Unknown to her, the man responsible for her death, Jack, is on a mission to find her spirit and end her second life.Alice takes flight, only to find herself drawn into the lives of those around her and the mystery permeating that place. From the humble streets of Elysium to the mirrored spires of Memoria, her journey takes her on a path that leads to a decision that will affect the fate of Nod.Along the way, she meets a cast of characters that include a madman with a dark secret, her faithful companion, Dog, and woman made of memory. Together, they help her on her journey as she uncovers the truth of Nod and the woman behind it all, the Red Queen.

Quick Links to buy a copy;

Swooning over the cover!! A proper stunner!! And that is what drew me into reading this along with the exciting blurb of a corrupted fairyland and the promise of some interesting characters! And the book is full of them!!Alice is dead and finds herself in this fantasy nightmare world where very little makes sense! She is accompanied by a dog who she finds leads her on an adventure into trying to make sense of why she is in the world of Nod, and why memories of her life and past keep appearing in her mind. She also encounters a number of characters along the way, some sent to help, some to hinder and the plot slowly evolves as she reaches different places. Alongside Alice and her story, we also hear of John and Jack and how they play a part in the scenario that Alice finds herself in and this added some extra interest. There are often quite dark elements - as in all good fairy stories! - and it did remind me a little of the tv show Dead Like Me, where the main character had died and was just trying to come to terms with that fact and make sense of it all, so there was a good mixture of humour and darkness.I loved the world that was created which the author had brilliantly brought to life, but just found some of the characters were difficult to connect with as very little was known of their past, and the pace of the story did move quite quickly to begin with so it didn't give you a chance to build up a bond with them. I did find it enjoyabe to read but often found it a little confusing and messy, so possibly if I went back and re-read it then maybe more would sink in and more would make sense to me as a reader!

Thank you to the publishers for the advanced e-arc of this book in return for a fair and honest review.