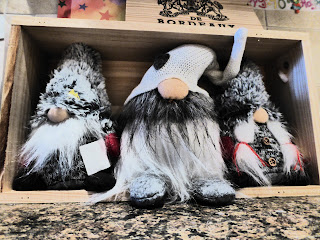 Hello!! Typing quietly today as I'm currently suffering from a headache that is proving to be a little resistant to the pills I took!!  Fingers crossed they kick in soon as it is driving me nuts.... and I've got reading to do!!

Hope you've all had an enjoyable week!  Found a couple of bargains in sales recently - clothes and candles! - so feeling rather pleased with myself on that front! And feeling rather pleased on the reading front too as progress is still going well!  Doing my best to keep up the pace, and trying not to be distracted with Super Mario Kart 8 (ooh it's good on the Nintendo Switch!), so have managed to read 4 books this week and could have finished another but I'm loving it so much that I've slowed my reading pace down so I can drag it out a bit longer!! Do you do that?!  Some books I want to devour in one sitting, others I want to remain in that world for as long as possible so take my time over!  The crazy world of readers eh!!

Here's a look at what I've been reading - reviews to follow on some as I'm on the Blog Tours later this month/early next month!

A book that messes with your mind - in a good way! Enjoyable thriller

Rachel’s dead and she’s never coming back. Or is she?As she prepares for her wedding to Dominic, Catherine has never been happier or more excited about her future. But when she receives an anonymous package—a familiar snow globe with a very grisly addition—that happiness is abruptly threatened by secrets from her past.Her older sister, Rachel, died on a skiing holiday as a child. But Rachel was no angel: she was vicious and highly disturbed, and she made Catherine’s life a misery. Catherine has spent years trying to forget her dead sister’s cruel tricks. Now someone has sent her Rachel’s snow globe—the first in a series of ominous messages…While Catherine struggles to focus on her new life with Dominic, someone out there seems intent on tormenting her. But who? And why now? She doesn't have the answers - and in one final question lies her greatest fear.Is Rachel still alive?

MISS PETTIGREW LIVES FOR A DAY by WINIFRED WATSON  -  5 stars

Loved this one! Such a sweet, entertaining and funny book looking at the day in the life of Miss Pettigrew! Highly recommended!

Miss Pettigrew, an approaching-middle-age governess, was accustomed to a household of unruly English children. When her employment agency sends her to the wrong address, her life takes an unexpected turn. The alluring nightclub singer, Delysia LaFosse, becomes her new employer, and Miss Pettigrew encounters a kind of glamour that she had only met before at the movies. Over the course of a single day, both women are changed forever.

Blooming flip this was an enthralling read! And chilling!! And twisty!! Loved it!!

One cold November night in 2014, in a small town in the north west of England, 26-year-old Arla Macleod bludgeoned her mother, father and younger sister to death with a hammer, in an unprovoked attack known as the "Macleod Massacre." Now incarcerated at a medium-security mental-health institution, Arla will speak to no one but Scott King, an investigative journalist, whose Six Stories podcasts have become an internet sensation. King finds himself immersed in an increasingly complex case, interviewing five witnesses and Arla herself, as he questions whether Arla’s responsibility for the massacre was a diminished as her legal team made out. As he unpicks the stories, he finds himself thrust into a world of deadly forbidden "games," online trolls, and the mysterious Black-eyed Children, whose presence extends far beyond the delusions of a murderess.

Something a little bit different and an enjoyable, funny look at where the world of sport could be in years to come!

The year is 2144, and the world is powered by sport - politically and practically. Each community owes its prosperity or otherwise to the success of its teams and athletes. A person's class is determined by their aptitude for sport. Once their useful life as an athlete has expired, they are placed in stasis at an age predetermined by that class.
But not in Wales.   Separated from the rest of the world by a huge wall, the Welsh still play games for joy. They play, they carouse, they love, they die. They have fun.
Of all the Welsh, the greatest sportsman is an unreconstructed genius called Ivon. When the chance arises to become the first Welshman to cross the great divide into England, he cannot resist. His parents, exiled from England before he was born, know what London will do to him. They are desperate to have him back. But London will not give up an asset like Ivon so easily.
Ivon is a celebration of where sport has come from and a satire on where it is going.

The postman has been complaining again - oops!!! #sorrynotsorry

This one arrived in the post this week with no covering letter so I have no idea who sent it my way - but thank you if it was you! - and it sounds like a really sweet (sorry about the pun!) read!

Sentaro has failed: he has a criminal record, drinks too much, and hasn't managed to fulfil his dream of becoming a writer. Instead, he works in a confectionery shop selling dorayaki, a type of pancake filled with a sweet paste made of red beans. With only the blossoming of the cherry trees to mark the passing of time, he spends his days listlessly filling the pastries. Until one day an elderly, handicapped woman enters the shop. Tokue makes the best bean paste imaginable, and begins to teach Sentaro her art. But as their friendship flourishes, societal prejudices become impossible to escape, in this quietly devastating novel about the burden of the past and the redemptive power of friendship.

THE ANTIPODEANS by GREG McGEE

Received this from the lovely folk at Eye/Lightning Books and it seems I'm set for another epic historic read soon!

Three Generations. Two Continents. One Forgotten Secret.
2014Clare and her father travel to Venice from New Zealand. She is fleeing a broken marriage, he is in failing health and wants to return one last time to the place where, as a young man, he spent happy years as a rugby player and coach. While exploring Venice, Clare discovers there is more to her father s motives for returning than she realised and time may be running out for him to put old demons to rest.
1942Joe and Harry, two Kiwi POWs in Italy, manage to escape their captors, largely due to the help of a sympathetic Italian family who shelter them on their farm. Soon they are fighting alongside the partisans in the mountains, but both men have formed a bond with Donatella, the daughter of the family, a bond that will have dramatic repercussions decades later.
The Antipodeans is a novel of epic proportions where families from opposite ends of the earth discover a legacy of love and blood and betrayal.

THE HOARDER by JESS KIDD
I adored Himself by Jess Kidd, and it made my list of best books of 2017, so I was lucky enough to be sent a copy of her new book - out 1st February 2018 - and cannot wait to start it soon!

Maud Drennan - underpaid carer and unintentional psychic - is the latest in a long line of dogsbodies for the ancient, belligerent Cathal Flood. Yet despite her best efforts, Maud is drawn into the mysteries concealed in his filthy, once-grand home. She realises that something is changing: Cathal, and the junk-filled rooms, are opening up to her.With only her agoraphobic landlady and a troop of sarcastic ghostly saints to help, Maud must uncover what lies beneath Cathal's decades-old hostility, and the strange activities of the house itself. And if someone has hidden a secret there, how far will they go to ensure it remains buried?

I am currently just devoting myself to one book! This rarely happens but I'm so swept up with the characters that I'd feel bad spending time with others until this is over!  So prepare yourself for a rather gushing review in the next few days over this book... unless it all goes spectacularly downhill in the last few chapters!  Eek, now I'm scared to finish it in case that happens!!
Was only made aware of this book while watching Simon of Savidge Reads on BookTube, and it just sounded like my kind of book so I promptly ordered it and have fallen in love! 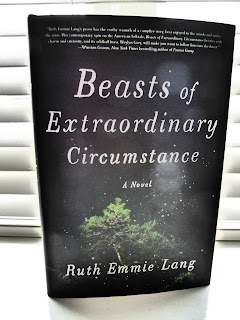 Orphaned, raised by wolves, and the proud owner of a horned pig named Merlin, Weylyn Grey knew he wasn’t like other people. But when he single-handedly stopped that tornado on a stormy Christmas day in Oklahoma, he realized just how different he actually was.That tornado was the first of many strange events that seem to follow Weylyn from town to town, although he doesn’t like to take credit. As amazing as these powers may appear, they tend to manifest themselves at inopportune times and places. From freak storms to trees that appear to grow over night, Weylyn’s unique abilities are a curiosity at best and at worst, a danger to himself and the woman he loves. But Mary doesn’t care. Since Weylyn saved her from an angry wolf on her eleventh birthday, she’s known that a relationship with him isn’t without its risks, but as anyone who’s met Weylyn will tell you, once he wanders into your life, you’ll wish he’d never leave.Beasts of Extraordinary Circumstance tells the story of Weylyn Grey’s life from the perspectives of the people who knew him, loved him, and even a few who thought he was just plain weird. Although he doesn’t stay in any of their lives for long, he leaves each of them with a story to tell. Stories about a boy who lives with wolves, great storms that evaporate into thin air, fireflies that make phosphorescent honey, and a house filled with spider webs and the strange man who inhabits it.There is one story, however, that Weylyn wishes he could change: his own. But first he has to muster enough courage to knock on Mary’s front door.In this warm debut novel, Ruth Emmie Lang teaches us about adventure and love in a beautifully written story full of nature and wonder.

All wrapped up! And headache still raging!! What joy!!  What books have given you joy this week?!