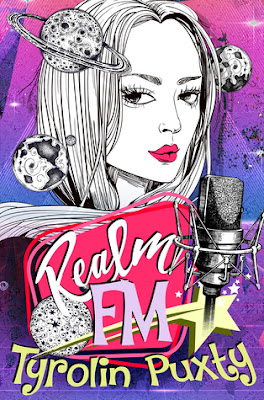 Okay. Fine. Amy Holt swore on air. Surely that doesn’t make her an inept radio host. Either way, she’s desperate for work; and if she doesn’t find something soon, it’s back to Australia. When the job of her dreamish nightmares presents itself, Amy jumps at the opportunity, surprised to hear that the station is built on a wormhole, opening it up to infinite realms. Interviewing Bigfoot and her doppelganger aren’t that problematic. Working for her sister’s ex-boyfriend though, is a whole other matter. He’s ridiculously charismatic. And good looking. Poor bugger is missing a six-pack, though. Suddenly, travelling through an apocalyptic wasteland and mollifying racist Bigfeet doesn’t seem so hard. Trying to avoid Ryan’s charm, though? Yeah, that wasn’t in the job description.

If you are looking for something light, funny and out of this world, then look no further!! I found this to be such a hilarious read and yet another hit from the author!This is the story of Amy who is an Aussie and has been sacked from her radio show for swearing live on air. Her and her sister, Lucinda then go to America to try and make their dreams come true but life for them isn't going as planned! But Amy gets a break when they cross paths with Ryan, Lucinda's hunky ex!, who works for Realm FM and Amy gets thrown straight in at the deep end, instanstly offends a guest and the audience love her!!But Realm FM is no normal radio station! It's built on a portal which is the key to multiple dimensions! So the guests are from a variety of species - the weird and the wonderful all listen in to Realm FM - and Amy instantly feels at home there! That tells you all you need to know about Amy!!I loved the relationship the sisters have and just adored the situations that they found themselves in. There are alternate realities, doppelgangers, illness by possession and even an appearance from Colt Harper (vampire cat!) which made my day! There are plenty of nods to modern life and all the madness it brings and this help make it even funnier! The relationship between Amy and Ryan was also extremely enjoyable and the overall message of living life to be happy and of loyalty was lovely to read!I love books that make me smile and snigger, and this did both throughout and I could easily see this as a TV sitcom - this needs to happen!! More please!!!

If you haven't heard of this author before then please check out my reviews of some of the other books from her that I've read! Click on the heading for a link to my GoodReads reviews! They've all been 5 star reads for me!