A Spell in the Country by Heide Goody #BlogTour #bookreview #giveaway

Hello!  Delighted to be taking part in this magic blog tour today, hosted by Rachel at rachelsrandomresources! So thank you for stopping by!  Am posting a review and a giveaway today  - you lucky people!!! 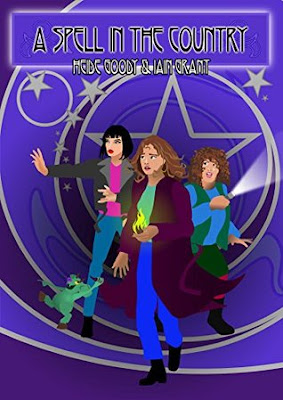 Dee is a Good Witch but she wonders if she could be a better witch.
She wonders if there’s more to life than Disney movie marathons, eating a whole box of chocolates for dinner and brewing up potions in her bathtub. So when she’s offered a chance to go on a personal development course in the English countryside, she packs her bags, says goodbye to the Shelter for Unloved Animals charity shop and sets a course for self-improvement.
Caroline isn’t just a Good Witch, she’s a fricking awesome witch.
She likes to find the easy path through life: what her good looks can’t get for her, a few magic charms can. But she’s bored of being a waitress and needs something different in her life. So when a one night stand offers her a place on an all-expenses-paid residential course in a big old country house, she figures she’s got nothing to lose.
Jenny is a Wicked Witch. She just wishes she wasn’t.
On her fifteenth birthday, she got her first wart, her own imp and a Celine Dion CD. She still has the imp. She also has a barely controllable urge to eat human children which is socially awkward to say the least and not made any easier when a teenager on the run turns to her for help. With gangsters and bent cops on their trail, Jenny needs to find a place outside the city where they can lay low for a while.
For very different reasons, three very different witches end up on the same training course and land in a whole lot of trouble when they discover that there’s a reason why their free country break sounds too good to be true. Foul-mouthed imps, wererats, naked gardeners, tree monsters, ghosts and stampeding donkeys abound in a tale about discovering your inner witch. 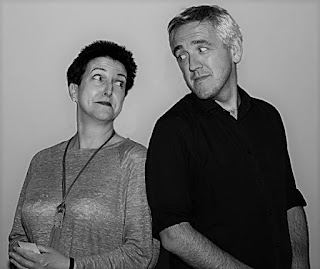 Author Bio –
Heide Goody is the stupid one in the writing partnership and Iain Grant is the sensible one. Together, they are the authors of seven novels, two short story collections and a novella.
The ‘Clovenhoof’ series (in which Satan loses his job and has to move to Birmingham) has recently been optioned by a Hollywood production company. Their latest novel, Oddjobs 2: this time it’s personnel, was published in August 2017.
Heide and Iain are both married, but not to each other.
Facebook
Pigeon Park Press Website
Twitter: @HeideGoody and @IainMGrant

I found this to be such a fun read, full of crazy capers and a full cast of wonderful characters!  It doesn't take long before you take the group of sassy witches to your heart as you follow their stories from the 'real' world where they each work in a variety of jobs and they find themselves all brought together on a course in the middle of nowhere but they aren't sure why they've been chosen!  It doesn't take long for the true reasons to be revealed!

I found myself chuckling along at many points and the character of Jizzimus is full of hilarious one-liners - he was definitely my favourite! I just couldn't wait to find out what he would come out with next!!  The witches all learn so much about themselves and the others while they are away and how they need to pool their 'witchy' resources together to fight those plotting against them!  Dee, Caroline and Jenny aren't your normal kind of witches - is there ever a normal kind?! - and when they all realise what they have in common you start to see the bonds between them strengthen, despite their reluctance in the beginning.

Highly recommended for all those looking for a funny, spellbinding read!!

And then there's more! A fabulous giveaway open to all!!

Giveaway – Win a Witch's Pamper Package (Open Internationally)
The package, worth over £100 contains…

GOOD LUCK ALL WHO ENTER!!