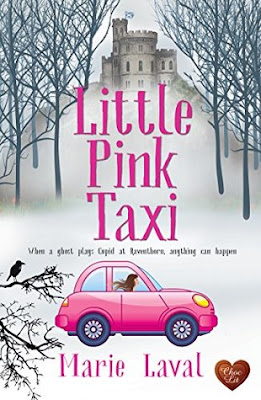 Take a ride with Love Taxis, the cab company with a Heart … Rosalie Heart is a well-known face in Irlwick – well, if you drive a bright pink taxi and your signature style is a pink anorak, you’re going to draw a bit of attention! But Rosalie’s company Love Taxis is more than just a gimmick – for many people in the remote Scottish village, it’s a lifeline. Which is something that Marc Petersen will never understand. Marc’s ruthless approach to business doesn’t extend to pink taxi companies running at a loss. When he arrives in Irlwick to see to a new acquisition – Raventhorn, a rundown castle – it’s apparent he poses a threat to Rosalie’s entire existence; not just her business, but her childhood home too. On the face of it Marc and Rosalie should loathe each other, but what they didn’t count on was somebody playing cupid …

It isn't difficult to take this book to your heart from the first few pages of this fabulous romantic comedy! Rosalie Heart is the kind of character that is so easy to love and her Taxi firm 'Love Taxis' are a godsend to the community where she lives.  And what's not to love about a bright pink taxi ferrying you from A to B?!

Those who aren't from the community find the Taxis a little odd, and that is exactly what Marc Petersen fails to connect with as he finds himself in the area.    He is there to take over the run down Raventhorn Castle, much to the shock of those who live there - Rosalie being one of them.  It comes as a bolt out of the blue to her as it's more than a home to her, it is her life and having grown up there she feels a deep bond to the place and knew nothing of the financial issues behind it.

Rosalie and Marc get off to a very bumpy start and that isn't helped when she tells him of local ghostly legends - he is quick to dismiss them but soon finds himself seeing things which he can't explain.  It doesn't take long before he becomes seduced by the charm of the castle and the community, which surprises him as he's from the cutthroat business world and doesn't normally get attached to things.  With him, it's all about the money!  He doesn't even want to be there as he's only tying up the loose ends of his late fathers' dealings and still can't understand how he ended up owning a Castle in the first place.

This book has a little bit of everything in it and that is what kept me so engrossed! There's romance, history, a supernatural element, mystery - the perfect mix of genres!  The characters are so easy to relate to, especially Rosalie who has a heart of gold and is always putting the needs of others ahead of her own.  Her affection for the Castle is also really touching and how she's determined to show off  to others the good that she sees and how vital her business is and how the Castle is more than just a historic setting - it's her home.

A treat of  read! Highly recommended!