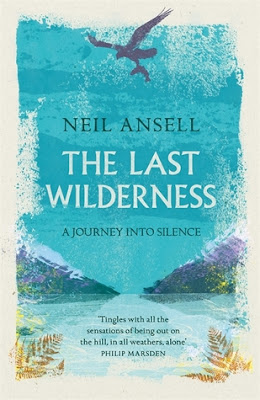 Neil Ansell's THE LAST WILDERNESS is a mesmerising book on nature and solitude by a writer who has spent his lifetime taking solitary ventures into the wild. For any readers of the author's previous book, DEEP COUNTRY, Robert Macfarlane's THE OLD WAYS or William Atkins THE MOOR.

'A gem of a book, an extraordinary tale. Ansell's rich prose will transport you to a real life Narnian world that C.S.Lewis would have envied. Find your deepest, most comfortable armchair and get away from it all' Countryfile


The experience of being in nature alone is here set within the context of a series of walks that Neil Ansell takes into the most remote parts of Britain, the rough bounds in the Scottish Highlands. He illustrates the impact of being alone as part of nature, rather than outside it.
As a counterpoint, Neil Ansell also writes of the changes in the landscape, and how his hearing loss affects his relationship with nature as the calls of the birds he knows so well become silent to him.

I found this to be a calming and enlightening read and am in total admiration of the author and wilderness walker, Neil Ansell, who sets off alone to enjoy the beauty that the world has to offer despite his own failing health.It is set in the North West Highlands and the descriptions make it sound like heaven on earth! Would have loved to have had some photos to accompany the text, but he has a wonderful way with words that helps paint the picture of the scenes he encounters. And with his failing hearing, you do get the sense that he picks up more on the sights although he does mention the sounds he misses as his beloved songbird soundtrack is slowly disappearing to him because of his deafness.This doesn't stop him setting off alone to explore the Highlands and noticing changes in the wildlife and scenery from trips he's made years ago, and it does make you worry about the mess that humans are leaving behind, especially as he even finds rubbish dumped along one of his paths in the middle of nowhere.It's a fascinating mix of nature writing as he encounters a variety of wildlife, alongside his own thoughts on his love of the solitude and how that hasn't always been compatible with his lifestyle, and that he doesn't feel he's missing out on things because he likes to be alone. It also touches on how those travelling nowadays aren't really cut off from the world with the use of GPS and the internet, as opposed to when you'd occasionally get sent a postcard from someone away and how you can never really be cut off from what's going on in the world because of technology and that saddens him.I loved how he wrote this over a period of 5 visits over a year so you get to see the changes each season bring and how his outlook differs over each time. It was absorbing and uplifting and I will be more interested to pick up the other books from this author now to enjoy more of his adventures and views.

My thanks to the publisher for the advanced reading copy in return for a fair and honest review.
Posted by Books and Me! at Monday, February 19, 2018