The Seven Deaths of Evelyn Hardcastle by Stuart Turton #bookreview 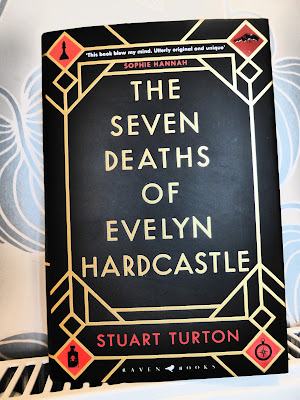 How do you stop a murder that’s already happened?At a gala party thrown by her parents, Evelyn Hardcastle will be killed--again. She's been murdered hundreds of times, and each day, Aiden Bishop is too late to save her. Doomed to repeat the same day over and over, Aiden's only escape is to solve Evelyn Hardcastle's murder and conquer the shadows of an enemy he struggles to even comprehend--but nothing and no one are quite what they seem.Deeply atmospheric and ingeniously plotted, The Seven Deaths of Evelyn Hardcastle is a highly original debut that will appeal to fans of Kate Atkinson and Agatha Christie.

Wow!  After finishing reading this book I was reminded just why I love reading so much! It's about discovering books like this!  Such an original, intriguing, captivating, pulsating read!!

Very difficult to sum this up in simple terms! It's a little bit Agatha Christie, mixed with Cluedo,  Groundhog Day, and a sprinkle of Inception thrown in for good measure!!  How can you not want to pick up a book with those ingredients in the mix?!!

Evelyn Hardcastle is the murder victim - but she doesn't just die once! She dies daily until her murderer can be found! And if Aiden Bishop doesn't solve the murder that day, then he wakes up in another guests body and has to start the clue solving process all over again!  You will end up a little confused at times but it's worth it for the ride you are taken on as you watch over the story unfolding!

The variety of guises he finds himself in are a clever way of watching things from a number of viewpoints.  And the time he spends as these other people begin to cloud his judgement as he starts to deal with their issues on top of trying to get to the bottom of what is happening at Blackheath.  He's also guided by the  rather strange Plague Doctor who appears at numerous points in the story to try and keep him on track.

Random clues are littered throughout the story and new rules seem to appear as Aiden goes along too - even if a character falls asleep during one day he finds himself going back to that character at another point to finish that day off. And there is no escape from Blackheath until the injustice is rectified.

This book worked well on so many levels for me as a reader! There's just so much to get your head round that you become immersed in that world and I often found myself thinking most of the guests at one point being the guilty party! Some of the hosts of Aiden are more focused than others and the little sub plots of previous misdemeanours coming back to haunt them at crucial points just adds to the tension and struggle that Aiden finds himself facing.

This book has something for everyone in terms of genre so if you are looking for something completely original, mad and enthralling then look no further! Brilliant!!