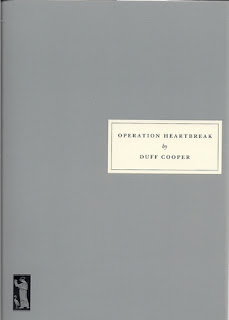 The hero of Operation Heartbreak (1950) is called Willie Maryngton; the central tragedy of his life is that he is too young to fight in the First World War and too old for the Second. Willie 'knew perfectly well that when a regiment went abroad on active service some officers and men were left behind. But he had never thought that he would be among those officers. The Colonel had talked about the first scrap, but that was just the scrap he wanted to be in. He had said something about heavy casualties. Willie minded little how heavy they were if he was in it, but how could he bear to sit at home, hoping that his brother officers would be killed so that he could take their place?' But Willie does in the end play a vital part in the Allies' eventual victory, and the knowledge that this book is based on a true wartime incident is in part why it is so moving. 'A story of why men go to war,' comments Nina Bawden, 'it is also a heart-wrenching love story; a wonderful novel by a masterly writer that should be on everyone's bookshelf.' And Emma Smith writes, 'I remember weeping copiously over Operation Heartbreak when I first read it - it is a deeply-moving book, beautifully written.'

My year of Persephone continues and this was the latest pick off my Persephone bookshelf and what a fantastic little read this one was! I was a little dubious as to whether I would find this book fascinating as I knew very little of it, but it has received rave reviews on some sites so that made me pick it up and I'm blooming glad I did!

What a powerful and emotional little book! Another classic from Persephone and one I feel glad to have read - and shed a tear or two whilst doing so!Such an understated book of a nearly man -Willie Maryngton - who was determined to fight for his country but fate always conspired against him so he always seemed to miss out. Too young in the First World War, too old in the Second World War. Even in his personal life he was plagued by unrequited love, and he finds himself hit by depression and poor health and it was often a heartbreaking read as you see him stumble through life unable to fulfill his dream to go overseas and fight in a battle with his colleagues.

The character of Willie is an easy one to bond with - the way he's always willing to be involved but taking disappointment on the chin - and as he suffers setback after setback, your admiration for him grows as he won't give up.When I found out that his story was partly based on a real life incident it made it even more poignant to know what his life ended up meaning and how life has a strange way of working out.