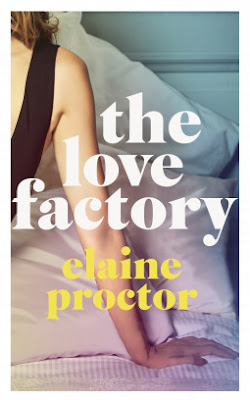 Delighted to be taking part in the Blog Tour for THE LOVE FACTORY! I hope you enjoy discovering a little more about this new book and the author behind it!

A smart, sexy, witty novel about love and desire, and how losing everything can sometimes be the best thing that ever happened to you.Anna is a writer whose small but perfectly formed novels sell zip. When she falls on hard times and tries her hand at erotic fiction, she faces an uncomfortable truth. Though she's a wife and mother of two, her stories fail to fly because she's never experienced true sexual desire. Even her Sicilian grandmother - wearer of diamante sunglasses and knock-off Louis Vuitton - knows more than she does about true passion. A romance-writing workshop doesn't help, so Anna turns to her friends for inspiration. As secrets and desires are revealed, Anna discovers more about the people close to her than she ever knew. When Cordelia, a romance-writing classmate, suggests she borrows an alter ego to banish her inhibitions, a new world opens up to Anna and The Love Factory - a group of writers penning ever more successful sexy stories - is born. And yet Anna knows that she can't rely on borrowed passion and an alter ego forever. For her tales to truly sizzle, she needs to find a proper love of her own. 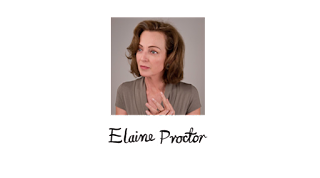 Elaine was born in South Africa, the youngest of four children. She grew up in Johannesburg and in the African bush which she loves.
Along with a small number of politicized white teenagers, Elaine became active in the anti apartheid movement. She began to document Black resistance to Apartheid in overtly political documentary films like Forward to a People’s Republic and The Sun Will Rise.  The latter was a series of interviews with mothers whose sons were on death row for political offenses.
Punctuated by bouts of film training in London, Elaine continued to make documentaries in South Africa until 1986, when the political situation made it impossible for her to continue to do so. Her final documentary, Sharpeville Spirit, followed the lives of a group of young activists organizing resistance in that infamous township.
Concurrent with her arrival at this political cul-de-sac, Elaine entered the masters program in writing and directing feature films at the NATIONAL FILM AND TELEVISION SCHOOL in England. Her feature-length graduation film called On The Wire, won the British Film Institute’s Sutherland Trophy (most original and imaginative first film) for 1990.  On The Wire, is the story of tragic marriage between a South African Defense Force reconnaissance battalion commander and his rural Afrikaner wife.  We learn through their relationship, and particularly his sexuality, what terrible damage the war exacted on both perpetrators and victims.
Elaine’s first film after graduation, Friends, continued to explore the personal stories inside the political epic that is Apartheid/post-Apartheid South Africa. It was selected by the Cannes Film Festival to be part of its coveted Official Competition and won Mention Speciale - Prix de Camera D’Or in that year.
She wrote a feature script called Manna about a cross racial friendship in South Africa.  She wrote Cottonmouth, a film set on the Texas/Mexico border.
The writing of her next film, KIN, told the story of the encounter between a Namibian elephant conservationist (Miranda Otto) and a visiting American lawyer (Isaiah Washington). KIN was distributed worldwide to critical acclaim.
Elaine then wrote LOADED, a series for the BBC looking at the creation of ‘new philanthropy’ and its consequences for world peace and development over the past two decades.
Paradise and the Dog of Plenty followed. It tells the story of five American women who go on a plastic surgery safari in South Africa with most unexpected results.
In 2009 Elaine wrote the novel RHUMBA.
She is currently writing her new novel which is set in South Africa.
Elaine sits on the chapter for screenwriting at the British Academy of Film and Television Arts and is a member of the Writer’s Guild of Great Britain.

I found this to be an intelligent, fun and sexy read that was a pleasant surprise as I really didn't know what to expect from this book!Anna is a writer of novels that don't sell well! She's also a wife and mother and her daily life in suburbia is beginning to take its' toll, even more so when her husband loses his job and they have to move her nonna in with them to save on the nursing home costs. She needs to change direction as a writer so she finds herself at a writing workshop where she meets Cordelia. She's much younger and has a different outlook on life but they click as friends and help each other out in their quest to improve their writing.Anna wants to write erotic fiction but her own life is lacking a little passion so she's struggling. Cordelia comes up with the idea that she should create an alter ego to unlock a different side to her, and it works! She then gets friends and neighbours involved in a writing project to create sexy short stories and this was a really interesting way to peek into the lives of those around her and discover a whole new side to them and their own struggles and outlook on life.I loved how this book created some memorable characters and situations and how a situation forces them to change habits and allows them to become someone who they'd never thought they'd be. The way that Anna had to become someone else in her writing then made her become herself in real life! Really enjoyed seeing how her family reacted to her change in writing style and topic - it doesn't go down well with everyone!I loved the stories within this story and it often got quite emotional for me as the reader with what some characters were going through. It was easy to read and really pulled you into the story and showed how the world of self publishing and blogs could help out which made it more relevant in the world we live in today. Thoroughly enjoyable!!