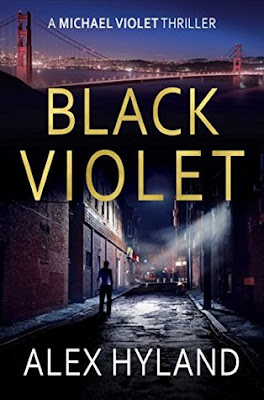 A MICHAEL VIOLET THRILLEROn the surface, Michael Violet is a legitimate San Francisco car dealer. But appearances can be deceiving. In reality, he’s a talented pickpocket lifting the keys to the city’s most luxurious cars.He’s kept his criminal life secret from his journalist brother, Jon, who’s made a career out of exposing corruption. But when Jon is killed, Michael uses his talents to track down his brother’s killer.Driven by guilt and revenge, Michael finds himself being forced into the role of the hero, whether he likes it or not.But turning from thief to hero isn’t going to be as easy as he’d hoped…Perfect for fans of Lee Child and  James Patterson .

My thanks to the publisher, Accent Press, for the copy in return for a fair and honest review.

I found this to be a fast paced thriller, full of breathless pursuits, a fascinating lead character and all the elements that keep you turning the pages until it's over!Michael Violet is a thief! But he has made the stealing of luxury cars a fine art and manages to keep his 'career' as a secret. But his world changes when he hears that his brother , a journalist, has been killed at his home after a burglary gone wrong - apparently. Michael doesn't believe this and sets out to find his brothers' killer and this leads him to enter a whole new world, and one where he ends up trying to play the hero.There are so many unanswered questions to why his brother was killed, and the more he investigates the darker the revelations become. He is forced to revisit his past, their childhood and face his regrets about not being in contact with his brother before his death.I loved how the author drip fed tiny bits of information throughout each chapter. It just raised your interest with each new page, trying to join the dots and work out the links before it was all revealed! And I can't wait for the next book in the series to see where this new life leads for Michael Violet!