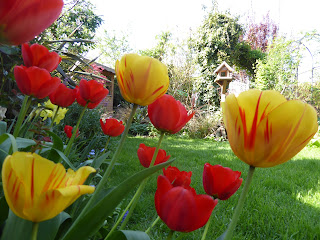 Hello! It's hot!!!  The past couple of days here in south east england have been unseasonably warm so after weeks and months of being too cold, too wet, too grey - it's now too blooming hot!!  But the garden has loved it and it just puts a smile on my face everytime I go out there!!

And if it's too hot to do much, that means it is best to conserve energy and just READ!! So my reading  slump from last week is now over and I'm back up to having finished 5 books this week!  Way behind on reviews though now - oops - so need to focus on those over the weekend!!

And the postie has been busy again delivering lovely book shaped parcels my way and I may(!) have taken a sneaky peek at NetGalley - despite telling myself not to go there! - and added 2 more reads to my Kindle!

So here's a quick little look at my bookish week....

The Man on the Middle Floor by Elizabeth S.Moore
This was a fascinating read that I raced through! Will post more thoughts here on the 29th April when I'm on the Blog Tour!

A really interesting look at how American society bought their way into the English aristocracy. Full review on the 4th May for the Blog Tour! 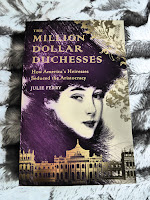 THE MAGIC OF RAMBLINGS by KATE FIELD

Loved this story of a woman finding happiness and herself at a crumbling mansion.  If you love Kate Morton books then you will love this! 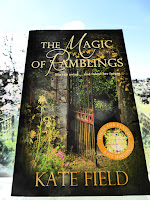 THE KINDNESS OF STRANGERS by JULIE NEWMAN

Don't let the sweet cover fool you! I loved this!  Just when the story was going one way, BOOM, big twists that I didn't see coming! Loved it!! 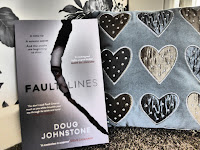 In a reimagined contemporary Edinburgh, in which a tectonic fault has opened up to produce a new volcano in the Firth of Forth, and where tremors are an everyday occurrence, volcanologist Surtsey makes a shocking discovery. On a clandestine trip to The Inch - the new volcanic island - to meet Tom, her lover and her boss, she finds his lifeless body. Surtsey's life quickly spirals into a nightmare when someone makes contact - someone who claims to know what she's done... 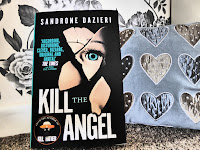 Kill The Angel by Sandrone Dazieri

When a high-speed train from Milan draws into the station in Rome with a carriage full of dead bodies, Deputy Police Commissioner Colomba Caselli, a fierce detective still reeling from having survived a bloody catastrophe of her own, is called to lead the investigation. After receiving a message claiming responsibility for the killings and announcing more murders to come, officers turn their attention to a small group of Islamic extremists.But Dante Torre believes authorities are being misdirected. For him the Islamic link is a smokescreen concealing the actions of a killer who has been committing murders all over the world for years: a woman who calls herself Gilitinè, after the mythological Lithuanian goddess of death. After further carnage, Gilitinè’s murderous plans escalate to macabre heights, and only Dante and Colomba can stop her. 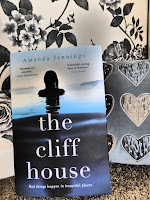 Cornwall, summer of 1986.
The Davenports, with their fast cars and glamorous clothes, living the dream in a breathtaking house overlooking the sea.
If only… thinks sixteen-year-old Tamsyn, her binoculars trained on the perfect family in their perfect home.
If only her life was as perfect as theirs.
If only Edie Davenport would be her friend.
If only she lived at The Cliff House…
Amanda Jennings weaves a haunting tale of obsession, loss and longing, set against the brooding North Cornish coastline, destined to stay with readers long after the final page is turned. 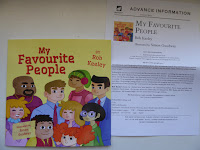 Rob Keeley’s first picture book!A book for young children all about the importance of relationships.Comes complete with suggested activities for bringing the book to life.Illustrated by Simon Goodway.My favourite people are…all in this book. And I’m going to tell you all about them. You can meet my Auntie Meg and Uncle Steve, my best friend Alice, my favourite footballer and the band that’s going to save the world. Then I’ll tell you about a brilliant idea I’ve had…Following his success as a writer of novels and short stories for older children – including the ongoing Spirits series, listed for the Bath Children’s Novel and Independent Author Book Awards – Rob Keeley makes his picture book debut with My Favourite People, a fun illustrated journey through childhood and the friends and family who make it possible. It’s an amusing and insightful look at the world around its central character, an excellent read-aloud or read-alone. It encourages young people to look at relationships and recognise their importance. It will appeal to girls and boys of lower primary age – and to parents and teachers reading the book aloud. 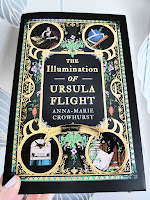 Born on the night of an ill-auguring comet just before Charles II's Restoration, Ursula Flight has a difficult future written in the stars.Against the custom of the age she begins an education with her father, who fosters in her a love of reading, writing and astrology.Following a surprise meeting with an actress, Ursula yearns for the theatre and thus begins her quest to become a playwright despite scoundrels, bounders, bad luck and heartbreak. 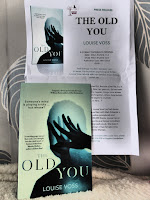 Nail-bitingly modern domestic noirA tense, Hitchcockian psychological thrillerLouise Voss returns with her darkest, most chilling, novel yet...Lynn Naismith gave up the job she loved when she married Ed, the love of her life, but it was worth it for the happy years they enjoyed together. Now, ten years on, Ed has been diagnosed with early-onset dementia, and things start to happen; things more sinister than missing keys and lost words. As some memories are forgotten, others, long buried, begin to surface... and Lynn's perfect world begins to crumble. But is it Ed s mind playing tricks, or hers...?

Girl with Dove by Sally Bayley   due out 17th May 2018
Growing up in a dilapidated house by the sea where men were forbidden, Sally’s childhood world was filled with mystery and intrigue. Hippies trailed through the kitchen looking for God – their leader was Aunt Di, who ruled the house with charismatic force. When Sally’s baby brother vanishes from his pram, she becomes suspicious of the activities going on around her. What happened to Baby David and the woman called Poor Sue? And where did all the people singing and wailing prayers in the front room suddenly go?
Disappearing into a world of books and reading, Sally adopts the tried and tested methods of Miss Marple. Taking books for hints and clues, she turns herself into a reading detective. Her discovery of Jane Eyre marks the beginning of a vivid journey through Victorian literature where she also finds the kind, eccentric figure of Charles Dickens’ Betsey Trotwood. These characters soon become her heroines, acting as a part of an alternative family, offering humour and guidance during many difficult moments in Sally’s life.
Combining the voices of literary characters with those of her real-life counterparts, Girl With Dove reads as a magical series of strange encounters, climaxing with a comic performance of Shakespeare in the children’s home where Sally is eventually sent.
Weaving literary classics with a young girl’s coming of age story, this is a book that testifies to the transformative power of reading and the literary imagination. Mixing fairy tale, literary classics, nursery rhymes and folklore, it is the story of a child’s adventure in wonderland and search for truth in an adult world often cast in deep shadow.

The Poison Bed by E.C.Fremantle  due out 14th June 2018
Elizabeth Fremantle's THE POISON BED is a chilling, noirish thriller ripped straight from the headlines.A king, his lover and his lover's wife. One is a killer.In the autumn of 1615 scandal rocks the Jacobean court when a celebrated couple are imprisoned on suspicion of murder. She is young, captivating and from a notorious family. He is one of the richest and most powerful men in the kingdom.Some believe she is innocent; others think her wicked or insane. He claims no knowledge of the murder. The king suspects them both, though it is his secret at stake.Who is telling the truth? Who has the most to lose? And who is willing to commit murder?

CURRENTLY READING
click on the book title for the GoodReads page for more info!
The Year of Surprising Acts of Kindness by Laura Kemp

Scoop of the Year by Tom Claver

☼☼☼☼☼
Not a bad little week then!  Got a pretty busy weekend ahead so not sure if next week will be as impressive!

Enjoy the weather and enjoy your reading!!