The Wildflowers by Harriet Evans #BookReview 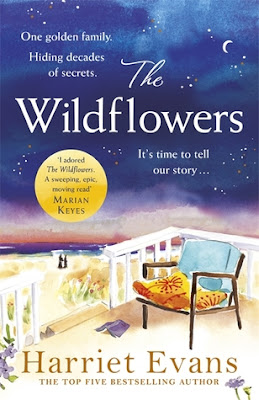 The Wildflowers by Harriet Evans is the spellbinding new novel from the Top 5 Sunday Times bestselling author of A Place for Usand The Butterfly Summer. Fans of Kate Morton's The Lake House or Santa Montefiore will delight in this book.
Harriet Evans is 'perfect for fans of Jojo Moyes and Maeve Binchy' Best
Tony and Althea Wilde. Glamorous, argumentative ... adulterous to the core.
They were my parents, actors known by everyone. They gave our lives love and colour in a house by the sea - the house that sheltered my orphaned father when he was a boy.
But the summer Mads arrived changed everything. She too had been abandoned and my father understood why. We Wildflowers took her in.
My father was my hero, he gave us a golden childhood, but the past was always going to catch up with him ... it comes for us all, sooner or later.
This is my story. I am Cordelia Wilde. A singer without a voice. A daughter without a father. Let me take you inside.

If you are looking for an epic family drama, full of scandal, regrets and dark secrets then you need this book in your life!  The author has created an astonishing family who seem to live an extremely privileged life but when you look behind the facade, it is often no more than a nightmare.

The Wilde family are an acting dynasty.  Tony and Althea are, on paper, a golden couple, with successful careers but, behind closed doors, they are two quite selfish individuals who seem to accept infidelity on both sides as long as it makes the other person happy! Mixed up in this are their two children, Cordelia and Ben, who witness the moods, the long absences, the cheating - no wonder they end up a little messed up too!  The family have a holiday home 'The Borsky' that used to have such warm and wonderful memories for them all, but that has been tainted over the years and through this book we get to look back at a number of times in their lives and put together the pieces of just what damage the dark secrets end up causing.

When I first started reading this I was a little concerned that I found I had no sympathy with the parents as they were so wrapped up in themselves, that it made them difficult to empathise with.  But as the different chapters in their lives were revealed, I became more involved with them as you got to understand them, their pasts and how they turned out the way they did!  And that goes for Cordelia and Ben too.

The character of Madeleine was an extremely fascinating element of the whole story!  She was obsessed with the family and would make notes of their every move whenever the family moved into the neighbourhood for the summer,and Cordelia and Ben were reluctant to befriend this strange little girl from the neigbourhood, but they soon found they got used to her being around and it was a distraction from the drama in their own home, so she became more involved in their lives.

The switching of timelines was a little confusing to begin with, as was the number of characters, but I soon became swept up in all the different threads - there are lots! - that it all just blended in and created an extraordinary drama playing out on the pages.  It often turned quite dark too and this just added to the impact that every secret revealed had on the family members.

It is a difficult book to sum up properly without revealing too much, but I found it to be totally enthralling and an exquisite look at a very dysfunctional family trying to come to terms with some very disturbing pasts.  Highly recommeded!!

Extremely grateful to the publisher for sending an advanced copy of this my way.